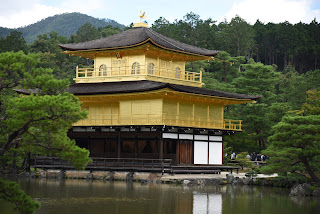 I saw a castle, a palace and two gardens in Nagoya, a shrine and a garden and folk museum in Takayama, Temples and a shrine in Koyasan, a garden and art museum in Hiroshima, a shrine in Miyajima, one of the top gardens in Japan in Okayama, a botanic garden, two palaces and gardens, two shrines, and another palace in Kyoto, two shrines and the Imperial Palace garden and two art museums in Tokyo and I've likely forgotten one or two.  Most of the buildings are reconstructions as the originals were bombed in World War II.

Pictured above is Kinkakuji, the Golden Pavilion in Kyoto. This Zen temple's top two floors are covered in gold leaf. The original was the home of a famous shogun in the 1400s. It burned down several times in history, most recently in 1950 when it was set on fire by a fanatic monk. It was rebuilt in 1955. Gold leaf is continually made to keep up the two upper stories. There were lots of people here but it wasn't so crowded that I couldn't get a good spot to take pictures of the Golden Pavilion. You cannot go inside so this beauty is admired from a trail that goes around three sides and into the temple gardens that have retained their character from the 1400s. 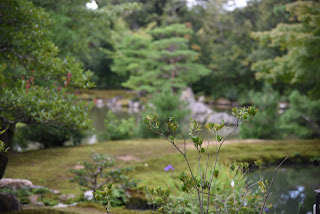 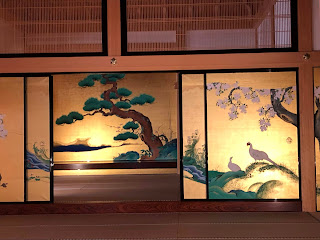 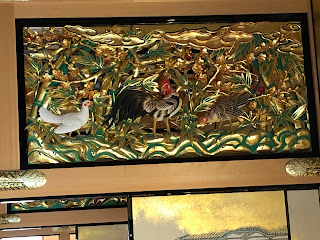 The art in the palaces is similar but I have the best shots from the palace in Nagoya because access was best. It's called the Hommaru Palace and like others was destroyed the war time air raids in 1945. It's restoration is recent which makes a difference in the vibrance of the screens. We're told that a wealth of historical records and over 700 photographs allowed for accurate rebuilding and restoration of this palace to its grandeur from 1615 which the original was completed. It was originally the residence of the first feudal lord of Owari. 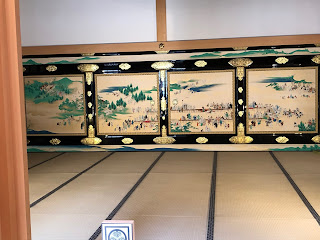 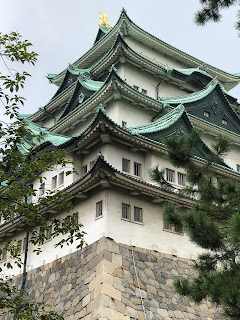 Nagoya Castle was the most stunning from the outside of any I saw. We weren't able to go inside because of restoration work. The website says it is being restored to its original condition. It was badly damaged but not destroyed in 1945.
It was originally completed in 1615. This photo doesn't show the votive tiger fish that tops the castle but it is there. I was able to enjoy these treasurers with my friend Jenni who with her husband and daughter recently moved there and Arlene who with me took Jenni her dogs.

For anyone who reads this and doesn't know, the two dogs weren't allowed to go with Jenni needed to leave to get her daughter in school. She paid our way to bring her the two adorable 15-lb. doggies that shared our foot room on the plane. That was the only reason I would have gone during this extremely hot time of year--temperatures in the high 90s with 60-70-80% humidity. My hair looked as if I were at the beach the entire time!
I'm going to make this blog post shorter both for you the reader and for me. That means I'll do more but makes the effort easier.
Posted by Maggie at 12:24 PM