I've been thinking lots about forgiveness since the St. George Quiet Day--about how deep the roots of grief and pain go in our unconscious and how much those unconscious hurts affect our lives. 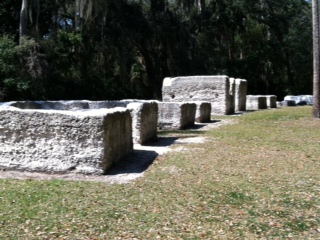 I was deeply affected by my visit to the Kingsley Plantation on Ft. St. George Island.  Nancee loaned me her car, saying that I would want to go to the Ribault Club--a lovely old club that was once open only to the wealthy who vacationed or lived on the island, but is now open to all.  She cautioned about visiting the Kingsley Plantation as it could be painful with ruins of old slave quarters.

I did stop briefly at the Ribault Club, where a woman who had attended the Quiet Day was the tour guide that afternoon.  The historic exhibits there are instructive and well done, but I hurried through so I could spend time at the Plantation.

The approach to the Plantation, maintained by the National Park Service, is through the slave quarter ruins.  While they were much sturdier than the shanties I've see African Americans and poor whites living in, they are strong representatives of a people who had no rights other than those granted them by their owners.

These dwellings had two rooms so were considered better than the homes for most slaves.  They were made of tabby, a concrete-like material made of crushed shells, sand, lime and water.  Think of the work it took to make the tabby to construct these homes.  Below is a close-up of one of the walls. 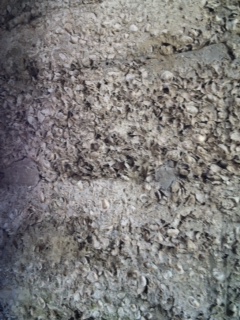 In addition to thinking about how those slaves lived in the plantation period of 17 and 1800s, I began to think of the beliefs and behaviors that imprison us.  Unlike the slaves of that era, we are often unaware of the ways we imprison ourselves, the thoughts and beliefs about ourselves that keep us from being the people that we were created to be.

I have a deep-seated belief (that I haven't yet unraveled) that if I am out in public with my healing journey story in too big a way, too successfully, I will be punished.  And for me, this message came (and I absorbed it this way) from both of my parents.  Mother absolutely couldn't stand for me to get attention when she wanted to be the center of whatever was happening.  She was so angry about a woman (only 1) who told her I looked like a movie star's daughter in a plaid taffeta and velvet dress the Wood cousins had bought me that she considered cutting the dress into pieces.  When I chose to be in a skit for a school program rather than play the piano, Mother tried to talk me out of it, even asking the teacher to be sure I was playing a solo, saying that was my talent--not the acting.  Dad made sure I was punished when I did too good a job of a task in the meetings.  Don't be too attractive or too successful.  Don't get too much attention on a stage.

I find myself looking for affirmation that I'm called to tell my story, to provide hope to some who might not find hope easily, from other women who are out in the world with what they are doing, particularly those who are in spiritual or religious pursuits.  And often (my priest friend Nancee a notable exception), they are only interested in what I've done if it can help them.  It's as if I've picked the women who, like mother, need center stage--or a platform bigger than the one they have, and want them to stand in for her--giving me that encouragement that I didn't get.

I'm wondering if forgiving Mother at deeper level than I have will free me to let go of the prison of wanting validation and encouragement from those who do not have it to give.

I know how many times seeing my boss standing at the back of the room looking stern (my assessment), maybe just perplexed, when during a large meeting, I said something that made those listening laugh, made a voice in my head say, "straighten up and be serious."  He may not at all meant for me to interpret his appearance in that way.  In fact he may not have been scowling as I often thought.  It was Dad's face I was projecting on him.

These are the prisons of my mind that I am working to break out of--the bars that I'm hoping to dissolve.  They certainly don't constrict my life the way the slaves lives were--though I identify with them by way of the tortuous meetings I couldn't escape as a child--but they do impede my ability to do what I feel called to do with my life at this time.
Where slaves worked sometimes -- 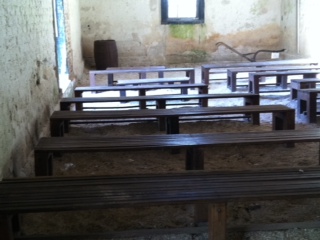 Prayers for healing for all who share this writing. 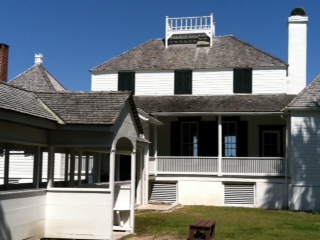 Plantation house from the back (the front faces
the river)

Amelia and Ft. St. George Islands -- and my talk 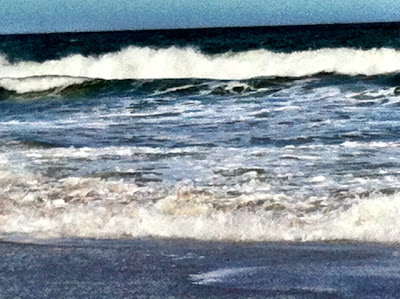 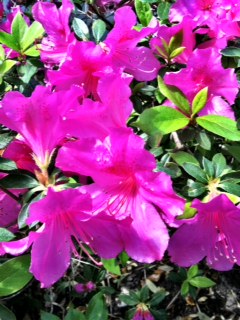 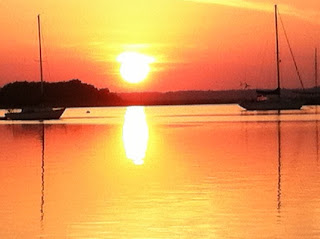 There are so many things I would like to write about this morning that it's hard to choose. However, I'm ruminating on my Quiet Day presentation at St. George's Episcopal Church on Ft. St. George's Island, Florida and how I might move forward to schedule similar programs so that is today's topic.

When I talk aloud about something I'm working on, I usually have insights that don't come other ways.  I don't know that this will suffice, but I'll try it and see. 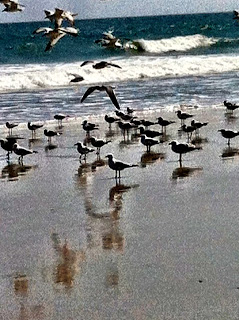 I probably need a publicist, but hope the Holy Spirit will lead for now.  One thing I learned was that I'm not comfortable with my picture and publicity posted around for all to see.  My friend, the Reverend Nancee Martin, and her staff had done an outstanding job with bulletin inserts and posters.  I found myself squirming as I looked at them.  Nancee took many photos of me--can't remember when anyone has ever done that--as she wanted me to have choices for future publicity.  Some are nice--and they all have lovely backgrounds as they were taken in beautiful spots.

My sea walks were wonderful and refreshing.  Sunshine reigned and although the temperatures were chilly until Sunday when it warmed, I relished my time on the beach.  On Friday I spend most of the day walking between and around the birds--my primary companions, perched on a dune on the edge of a state park where I was alone on the beach for a couple of hours, and tossed my shoes and waded in very chilly water one afternoon.  The sea restores me in ways the mountains cannot.  I returned grateful but not happy to be back.  (My 80-year-old friend and I snowshoed to a favorite lake last Friday, accompanied by memories of our friend who now walks California beaches.  She wants to do a couple more snowshoes so we will--if there is enough snow.)

The Quiet Day presentation was easy--the way things are when I'm doing what I'm supposed to be doing.  The folks there were welcoming and open.  They participated in the sharing, some deeply.  I used the nature photos for sharing my story, knowing that since those people live in such a glorious place (more about that in a bit), nature must be important in their lives.  The lone man asked a question about forgiveness that allowed more conversation about that important topic, and the woman who gave me a ride to church (so I didn't have to go for the early service) said that had impacted her more than anything.

I spoke about healing--through nature, through my meditation practice, and through opening more and more to Divine love.  Through the Darkness into the Light was the topic--perhaps more appropriate during Lent than other times, but it speaks of my journey.  The participants shared their childhood escape or safe places generously when I finished that portion of my presentation.  I had asked that question when I gave a short program for my Daughters of the King prayer group and had one lone responder.

The most effective tool for the primary exercise I used came to me as I walked the beach--broken, but lovely shells.  Other options were writing or drawing and choosing a scripture verse from those I had available, but most chose a shell for reflection.  The topic--what keeps you from opening fully to God's love or from being the person you were meant to be.  I was clear that this could be related to any part of their lives.  Their shares were inspiring. 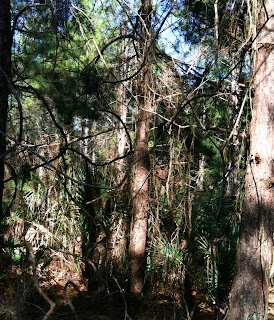 The islands--Amelia and Ft. St. George--have old growth forests with moss swinging from high branches and lush vegetation as well as wonderful waterways and beaches.  That was a delightful surprise.  One of Nancee's parishioneers took us on a walk through the Ft. St. George forest.  There are other sights worth mentioning on that island, but that's for another day. 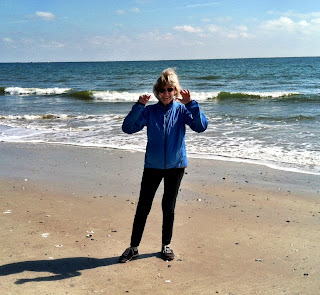 Blessings to all who read.
Posted by Maggie at 8:43 AM No comments: