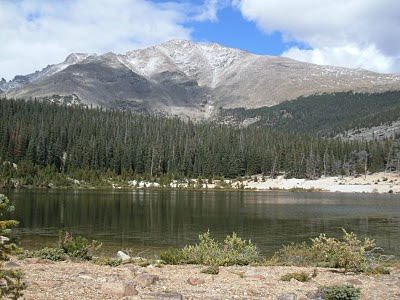 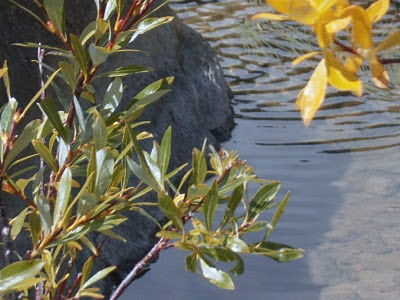 It interests me especially when my journey matches that of the season. It is the in-between time in the mountains. The flowers mostly gone, and snow lightly sprinkling the peaks around Sandbeach Lake, yesterday's destination, gave us notice that we can't count on sunny warm fall hiking days. We could have a number of fall hiking days at lower elevations, but time is running short for hikes in the 11-12,000 ft. ranges.

My life seems to be in-between too. I'm not where I used to be, putting on suits and business dress to go to a job. I piled those clothes (with a couple of bright suit exceptions) still in my closet in the giving away pile a couple of days ago. It felt more wrenching than I would have expected. It wasn't that the suits I took off hangers would be ones I could wear without having shoulder pads taken out and skirts taken in. They represented a time when others listened to me, when I worked on a bigger stage, when what I did made a difference to a number of people. The last vestiges of that life ended when I moved to Colorado. Now I listen to others, I facilitate, take what the group wants and move it forward, if in fact I have that roll.

I was completely in the background for the first half of the twelve plus years I've been in Colorado. It was necessary for the first few years--writing and healing. As I wanted to come forward, I looked too much to the church, and those opportunities eluded me. My calls seemed to be with small groups and mostly supporting others in their leadership roles

It is with this writing that I'm understanding the fatigue I'm having with that role. Even as I take on small leadership slots, they are about supporting and tending, and not about emerging. No doubt this fatigue about my current life, too much involved with supporting my daughter in her business, is bouncing against my childhood's role of care-taking and supporting my parents in their wishes. Then I rebelled against Mother by being certain not to become a school teacher. I didn't follow Dad's idea of taking the civil service exam to become a clerical worker for the government. Some of what I chose was what I wanted. Some was about not letting my parents influence me (although my change to a business major was my Dad's idea). They would eventually say they simply didn't understand what I did professionally. It was foreign. I hadn't met their expectations in so many ways.

Whose expectations am I meeting now? What call is mine at this stage of life? That old fatigue that is rising in my gut likely comes from the way I've taken on supporting others, based on a childhood model. There is another way. Finding it feels like the task of this in-between time.

Now to a meeting with my daughter and a trip to the Denver Design Center--mostly to return bags of fabric samples to various showrooms--a delivery girl's job! This writing has given me food for thought on the drive.

PS: That stuff in the foreground of the lake photo is SAND--around this high mountain lake!