Fall's Beauty -- and What's Underneath or on the Other Side 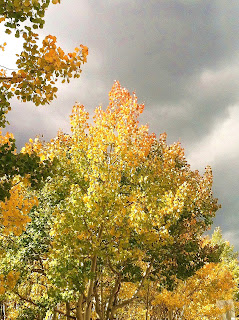 A late summer/early fall thunderstorm is looming--a good time to be inside.  It was predicted to rain much earlier in the mountains so my hiking companion cancelled for today.  Yesterday I spent the day in the mountains driving and walking among our golden aspen leaves taking photos.  It was gloriously beautiful, even when, as you can see above, the aspens were painted against dark rolling clouds and threatening rain.

I drove from place to place, avoiding most of the rain--and snow I could see in the distance where I had planned to hike.  On my way out of a dusty road that led to a Boulder County park where I had taken pictures of me, trying to get aspens in the background (my arms weren't long enough!), I turned into a steep road that led to "Mud Lake."  The loveliness of the grass and trees surrounding that lake were more beautiful than the photo below. 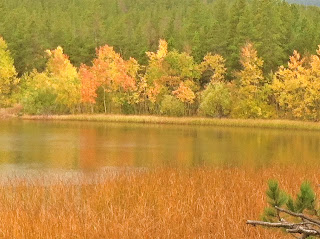 Not yet ready to leave the area so profuse with beauty, I turned onto a dirt road I had always passed by.  As I was about to decide that it was far too dusty and bumpy--as if life some days--I gasped at the red in the aspen ahead.  I so miss the red and orange fall leaves of Missouri and Tennessee, and this year I have found more reddish aspens than ever.  Here is the tree that lured me forward, and a photo I pushed through the dense forest to take. 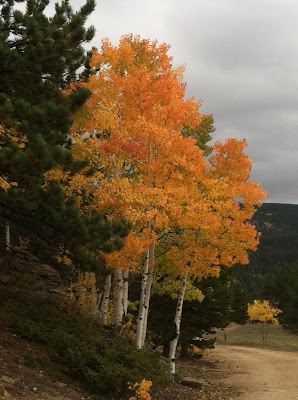 Then I decided
to take a different
way home. 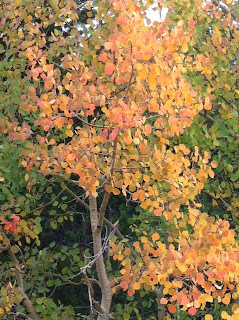 I
drove up through a canyon studded with golden aspens and back down through the burned-out forests left from last year's big Boulder County fire.  It was a contrast I hadn't planned.  I was going to cut over to another back road into the highway north of town, but either I missed the cut-off or it was the road marked "narrow and steep mountain road."  I chose not to drive my new (to me) front wheel drive car on that road since I was already on a mountain road that would become narrow and steep in places.  With the old Subaru, I wouldn't have hesitated, but I am still learning what my Hyundai will do easily.

The Sunshine Canyon road on which I drove was filled with lovely aspens and bare aspens.  I could also see the first snow falling on distant mountain tops from a couple of vantage points.  Shortly before I reached the tiny mountain town of Gold Hill, I began to see remnants of the fire.  As I started down the mountainside, its ravages were on either side--black "sticks" standing on a barren landscape.  It erased the joy of the earlier afternoon as the nature girl part of me grieved for those dead trees.  It was evening before I mused about the stark contrasts my drive had exposed.

I have been reading Richard Rohr's Falling Upward, a spiritual book about the two halves of life.  In his chapter called "The Shadowlands," Rohr talks about our shadow sides and says that if we are in the second half of life (and he also says that many never make this crossing from the first to the second half of life), we are familiar with at and have spent time with at least some of our shadow side.  He defines our shadows as "what you refuse to see about yourself, and what you do not want others to see."

What I wanted to see in the mountains was the golden aspens, though much of the time I saw them against a dark background.  It was a bit like seeing my true self with the false self, the one I constructed to please others and make myself feel as secure as possible, always lurking in the background.  Rohr calls the experience I often have--learning about my shadow side through over reactions to remarks or behaviors of those with whom I come in contact (today, those in my non-profit volunteer world) the "golden shadow."  I'll think of the aspens, shining against the threatening clouds, as I find myself pulled back into false-self behavior.  As I say, "oh that will turn into a positive lesson," when something I say or do reminds me of my shadow self, I'll try to think of it as a "golden shadow."  And as I think of contrasts, I remember that the pure gold is inside each of us.  The outside gold, like the Aspen leaves, doesn't last.

I do love those golden leaves.  Perhaps they resonate with that inside gold?!  I admire them even after they have fallen and haven't thought about what that might say to my soul.

On another day, I'll say more about Rohr's Shadowlands chapter and how it speaks to me. 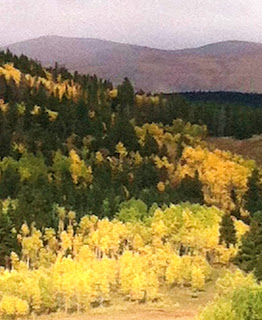 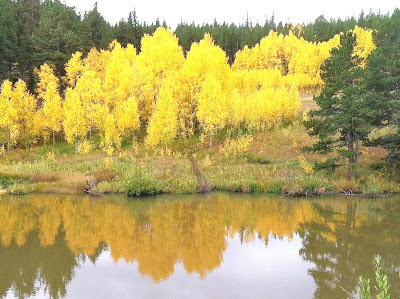 Posted by Maggie at 4:12 PM No comments:

Savoring the Moment--Even When the Insights Aren't What One Wishes 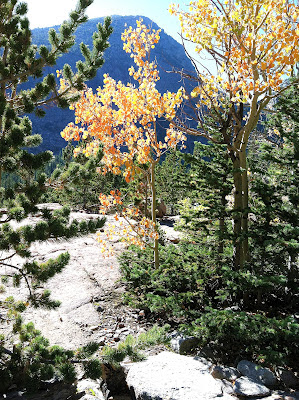 Earlier I was writing.  Then the Internet connection died, and I can't find my draft.  That could be a good thing.  I was pouring out my heart, probably not so good--and not much fun for you to read.

I have friends and acquaintances who have had tragedies and difficulties in their lives this week--dear friends who lost a dog to cancer, who in a bit over a year had become an integral member of their family, a friend who underwent her second surgery for breast cancer, difficult though it appears it hasn't spread, and a church friend/acquaintance who died Monday after suffering a stroke at her home on Friday evening and wasn't found until Sunday night--and she was only a year older than me and hadn't been in bad health.

My recent automobile accident made me realize that we never know what a few minutes, hours or days will bring.  The church friend's death was yet another wake-up, reminding me that the things I plan to do in the future need to begin now.

I did rearrange my writing/office to make it easy to decide to paint.  It gives me hope to see the blank wall covered with plastic on which I have put a small canvas on which to paint.

I've been using "all the tough insights" that have surfaced since the accident, the painful awakening that I can't count on family here, and that my friends who can really be there for me when times get tough mostly don't live in Boulder or Boulder County, as excuses for not writing or painting or getting my proposed website together.

This is also about to be fall in Colorado.  Fall and fall colors here are short lived.  The first Boulder snows usually come in mid-October, and while there is hiking time after that, it is usually lower hikes as snow melts and refreezes on higher paths, making shady paths treacherous.  Now is the time to get out and enjoy nature. 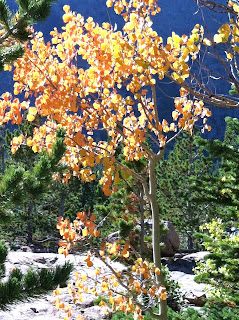 I'm off for a walk nearby and hope to hike tomorrow.

Enjoy the moment!
Posted by Maggie at 11:09 AM No comments:

A Rainy Day - - Outside Quiet; Inside Churning

This photo from my I-phone is from the banks of the Boulder Reservoir on my walk yesterday--one of the first local signs of fall's approach. 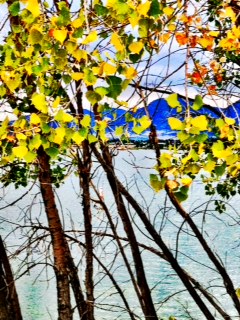 As I try to write on a longer piece, I find myself avoiding the blog and now understand why a couple of writer acquaintances say they don't blog.  However, today seems a good time to look at beautiful photographs with flowers and fall colors.  The paintbrush photo below was taken on July 4th at Butler Gulch, which is off Highway 40 heading toward Winter Park ski resort. 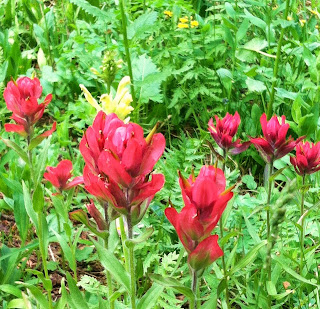 The rain is much needed; the humidity feels so good on my skin.  I went to Yoga at the Y and enjoyed letting the light rain sprinkle on my head as I walked from my car to the door.

Oh yes--Yoga and the big toe that is healing.  Yesterday I walked about an hour around nearby lakes without noticing a twinge in the big toe broken in the automobile accident five plus weeks ago.  I didn't think about the toe flexing that occurs in several Yoga postures until I tried doing one.  I quickly decided that I would need to baby the big toe in some ways a bit longer.  I was able to do many of the position though and enjoyed the practice.

It is quiet in my writing room.  This rain has brought no thunder or lightening.  Most of my neighbors are away at work.  This should make life peaceful, right?!  However, inside I am in turmoil.  Difficulties within an organization as one Executive Director retires and we seek another are disturbing.  My term as president does not begin until October 1st; however, family health problems are keeping the current president busy, and I feel left holding the bag on unfinished business.  I yearn to make decisions and get on with the job.  But is that appropriate?  Those Executive Committee members I have e-mailed do not answer.  Board members who supposedly do not know what's happening do.  I just screamed!!!!  It felt good!

Other things are churning too--old emotions and feelings.  Watching manipulation up close is disconcerting.  It hearkens to times when I've allowed myself to be manipulated (not childhood since I had little power there)--and when I look at how I've been manipulated, then the next place to look is where I have done the manipulating.  Neither are pretty.

I think of times when it has seemed for the best that I was using manipulative tactics to achieve my objectives--words that were freighted for example.  "This is a difficult way to approach the problem," could be a simple example as it implies that I have an easier (and hence better solution).  If I can sound kind and helpful in the process, then my chances of getting what I wanted were much better.

My intention is to be more aware--use my objective self to notice--when I am tempted to be manipulative in conversations and decision making--and take another path.  I won't always be successful, especially when I'm feeling my buttons being pushed.  However, when I'm over-reacting, that's when I know there's something I need to learn from the experience.

Blessings to all,
Maggie/Margaret
Posted by Maggie at 2:30 PM No comments: