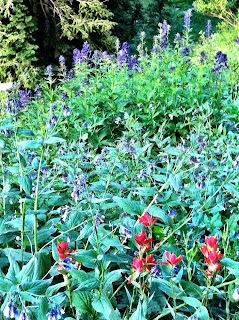 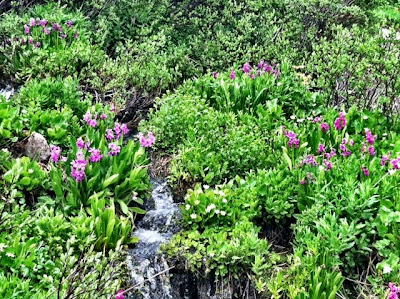 My plan -- to share the best of this season's wildflowers -- has turned into more of a task than I'm up for.  So other than the top picture from Boulder County's best trail, these are all from Butler Gulch.  Since the Butler Gulch trail leads to flowered meadows above tree line, it is similar to the high country flower areas that are too far to drive in a day.  This one is 150 miles round trip, but since most of it is interstate, it takes about an hour and fifteen minutes to get to the parking area--about the same time it takes to reach most trails in Rocky Mountain National Park, which is about 80-90 miles rt.

I went by myself, but was accompanied back down the trail by a young Korean man from Denver, who let his five friends continue their run toward the parking lot without him.  He had the car keys so didn't worry about them leaving him. 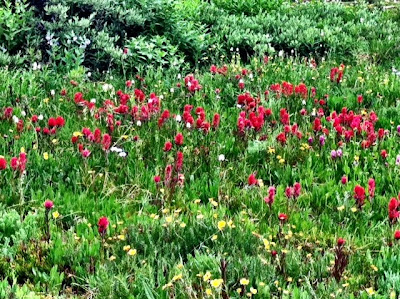 This is what I'm climbing that last steep part of the trail to see--meadow after meadow of wild flowers!  On the hillside above this meadow I found these columbine in stages of bloom backed by dwarf chiming bells. 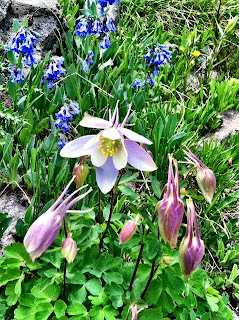 And though taking pictures of myself doesn't bring the best result, this gives you a sense of the fields and how delighted I was to be there! 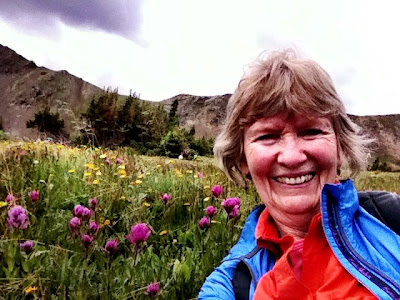 And the stream--near one of the crossings--and there are three.  On this trail, it's guess how you can get across without getting water in your boots.  And I did it--barely!

Do notice that the new photo for the blog is also up high on the Butler Gulch meadows.  I sat among the flowers and ate lunch.  I hope you feel as if you have been somewhat with me on this wonderful hike. 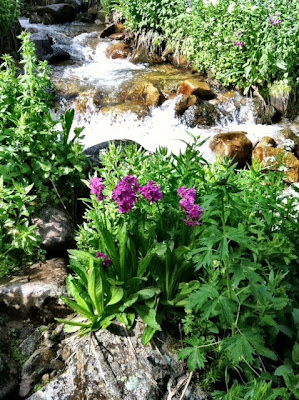 I wondered if it might be the last time I took this trail as I ate my usual hot fudge sundae in the ice cream shop in Empire and watched the rain pour from the skies, waiting for it to lack before starting back toward home.  I am truly blessed to have these wonderful hikes and this beauty waiting.
Posted by Maggie at 1:12 PM No comments:

When Things Seem As if They Are Going the Wrong Way 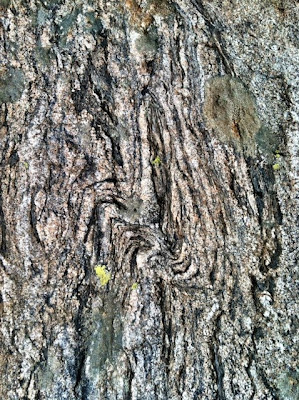 This spot in a huge Boulder was pointed out by my friend visiting from Nashville--a geologist by training.  In today's blog, it represents how I was feeling and the force I felt I was pushing against as I began writing.  Looking closely, it holds beauty too.

This post will really be about beautiful wild flowers and hikes.  The title doesn't sound that way.  I know. And the new blog cover photo was taken a couple of weeks ago in that same wonderful meadow at the top of Butler Gulch off the highway between Empire and Winter Park--a 150-mile round trip so it's one of my summer luxuries.

Our "new" Voices For Children CASA (Court Appointed Special Advocates) Executive Director completed her last day about 2:15 last Friday, and another search is on.  The committee isn't as strong as last year's, not as independent of the loudest voice.  I don't have as much influence as I'd like with the committee chair, and yes, as board president I appointed her.  It feels out of control even though we have several qualified candidates.  Perhaps out of control is good.  Maybe mixing it up is the way we'll come up with the best candidate for the job at this time.  It doesn't appear that we will get the most qualified candidate, but perhaps someone looking from a different point of view will be good.

I'm rationalizing.  But for my own well being, I must let go of the outcome.  I am letting go of the board presidency at the end of my term--September 30th--and don't remember when I've felt so "right" about moving away from a leadership post.  It's a little hard to see that end right now as I'm the go-to person for the staff, and have the responsibility to be sure grants are mailed/finished, meetings attended, and all is well at the office and that plans for our big fundraising luncheon on September 20th are on track.

Did I just make the case that I have enough on my plate without trying to control (guide I would say) the search outcome?!  Is this just another opportunity to let go of power and control--one of the ego centers that gets in the way of the true self showing up?

I have a practice called "the welcoming prayer."  It's welcoming the distress showing up from one of the three centers of need that get overblown and govern our lives--power and control, esteem and affection, and security and survival.  That practice works in reverse.  As I say "welcome, welcome, welcome my need for power and control in this situation," over and over the angst begins to loosen.  I'm doing that now.  Next I will welcome my need for esteem and affection as it seems to be playing in this scenario too.

Now to the mountains and flowers, which actually aren't part of this blog after all.  I'll write about them in another post.  Here are a couple of photos that remind me that creation is good whether or not things are going my way. 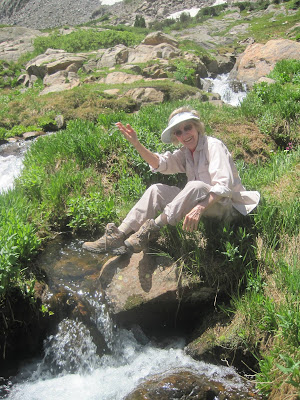 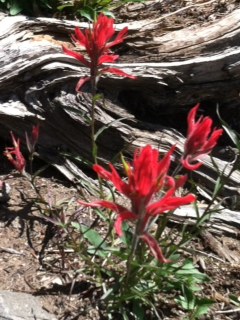 Above, me at the falls below Isabelle Glacier, taken by
friend John Bowers from Nashville during our Indian Peaks
Wilderness hike last Tuesday.   To the right, paintbrush
above Isabelle Lake on the same hike--from my I-phone.

Posted by Maggie at 7:37 AM No comments: