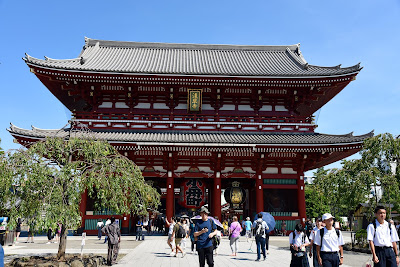 This is the Senso-ji Temple, considered by some to the Tokyo's most famous. For me it was the one four blocks from my hotel. When it rained I went to the end of the subway line which was a few steps away from this Shinto Shrine. The complex is large and I started early when it was cool and still emptied my water bottle and was hot and thirsty when I visited. I even stopped in a MacDonald's for water, a clean bathroom and a Japanese style ice cream coffee. It was early enough that there wasn't a line to get in which I saw at all the MacDonald's near train stations. The other customers were all Japanese.

The Sense-ji Temple was founded in 628 making it the oldest temple in Tokyo. It's a Buddhist temple and the largest and most lavish of any Buddhist Temples I visited. As with others, these buildings are recent reproductions as the others were destroyed in WWII bombing. 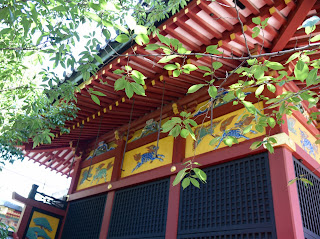 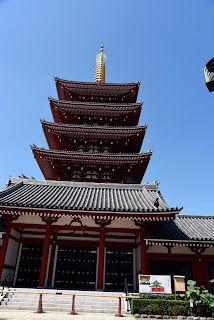 Art is painted around the roofline and on ceilings. The five story pagoda isn't open as it holds burials.


The Kaminarimon Gate below is one of the most photographed sights in Tokyo.  Look at the people under it to get a sense of its size. I saw and took a couple of photos of family groups standing under it. 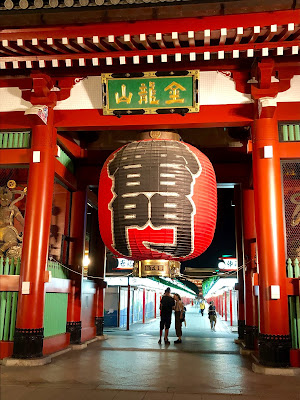 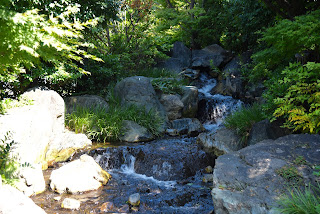 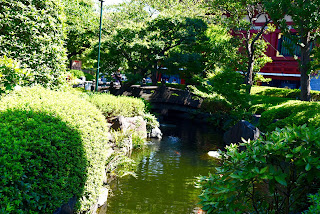 There are nice gardens here but the shrine and all of its buildings are the show. I did walk through all of the gardens and found them lovely. 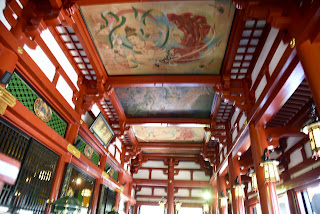 As you leave the shrine, you can walk into this covered street of shops, some many years old selling all types of souvenirs. I intended to go back to one of them for a couple of purchases my last morning but changed plans and needed to leave for Harajuku, the youth area first thing my last day. 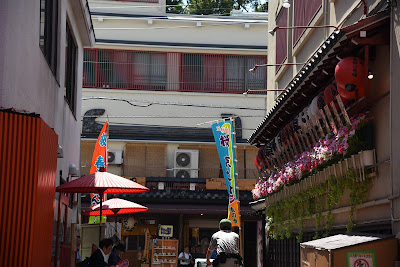 Now I'll go from the flashy Buddhist shrine to the most austere. I'd read about Ryoan-ji in Kyoto both in my Frommer's Japan and on line. It's a dry garden with fifteen rocks arranged in three groupings surrounded by gravel. Fifteen signifies completeness in Buddhism my guide book says but only fourteen can be seen at any one time and that depends on where one sits or stands. Scholars have argued the how and why of fifteen rocks in that formation over the centuries. The Temple was acquired as a Zen training center in 1450 and the garden is supposed to have been created by a highly respected Zen monk around 1500. 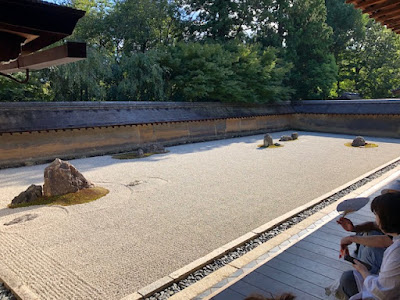 I understood that it would be crowded but had found that with the heat and schools having started most shrines and gardens weren't so crowded. There were people sitting around the side and one end of the garden, most quiet. They were willing to move so one more could sit. It was hot. The side was in sun as was most of the garden. I didn't stay as long as some but moved to the side moss garden where others were silent, some meditating. The feel of this shrine was peaceful, so much so that I didn't want to leave. 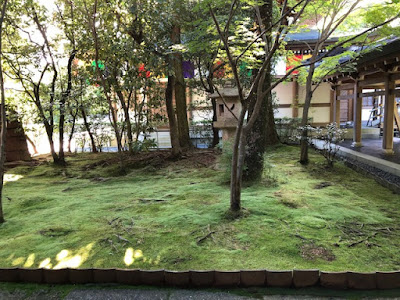 I chose to leave by walking through the peaceful manicured woods as I left since I'd stayed so
long that I was going to catch a bus back to the Kyoto train station and catch a train back to
Nagoya and my friends' home. Only a silent man and a young couple who asked if I'd take their photograph passed me as I walked and watched the sun flicker in and out of the woods. 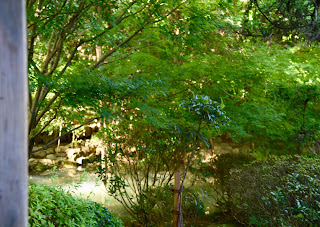 The main building at Ryoan-ji is called a tea house. It isn't open to walk through but was easy to see as I walked around it. The painted scenes are similar to others in palaces though this was never a palace. 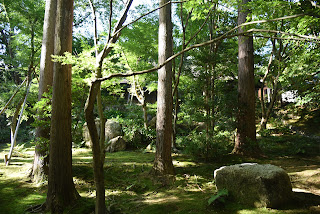 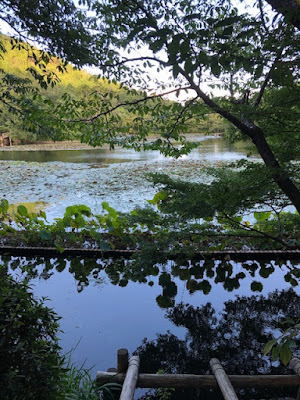 This pond was made in the late 12th century. The light on it was different when I went in and I could made a study with the photos I took. It is lovely! I left Ryoan-ji Temple feeling a sense of peace and being reluctant to leave.

Back on the street I think I misunderstood the bus stop sign and again walked what the sign said was .7k--and in the heat seemed longer to the next bus stop and caught a crowded bus using my train pass headed thirty minutes or so to the Kyoto train station. Sleeping youth occupied the seats for the elderly and handicapped. About halfway a young boy came and said there was a seat for me. I looked to see that a woman tourist had stood from her seat and motioned me to take it.

The Kyoto train station can barely be imagined by photographs. 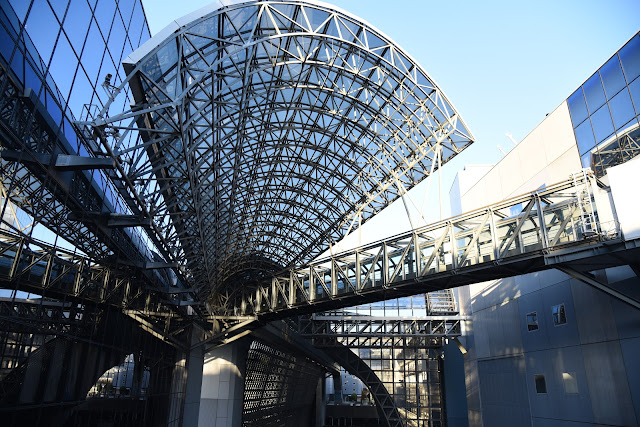 And that afternoon I was joined by an Australian woman from Perth (my Nagoya friend is from Sydney) as we took photos of the changing pictures beamed onto stairs that looked down on the station. I knew what track my train was on and what time the one on which my reserved seat car was coming and enjoyed my time in this station including the garden at the top of four escalator flights. 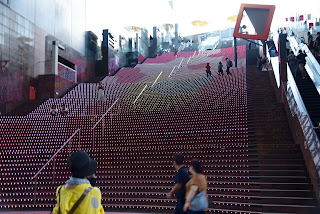 Posted by Maggie at 3:25 PM No comments: