A Waiting Line -- Visitors to Prisoners in a Maximum Security Prison

There can be no photographs. We are allowed our drivers' licenses, a car key, and if we use one, the card for the vending machines once we are passed through security and before we are walked out to the pods (if that's where we are visiting) to see our prisoner friends and family members. Now that the weather is cold, our coats and other wraps go through screening with our keys and licenses.

We wait in line. Last week one of those waiting was a mother with a nine-year-old boy. She said he was going to visit his birth dad for the second time in a pod different from the one where I visit a man who has become a friend, living on death row. Once we were with our guard escort, the boy ran ahead, anxious for his visit. The guard, a kind man retired from his first job, asked the mother to call him back as he led us up to the door of Unit Two, where I was let off.

The waiting line that day included a nicely dressed white woman in a wheel chair who was visiting someone in the minimum security part of the prison. She had to be hand searched, holding up the check-in line for several minutes. Her nephew wheeled her to check in, and was coming back to get her.

Most of the visitors are persons of color so those of us who are white stand out. Over weeks and months, if like my friend, David, who visits regularly on Monday evenings and is always in line before the doors open, we become acquainted with others who wait.

I'm (like David) part of a group of volunteers who have been matched with a death row prisoner. Our Monday evening visitors and prisoners are like a family group, better than some as we don't argue or complain about trivial things. Recently, a new visitor from that group, standing in line, recognized the mother of a young man recently incarcerated and went into the minimum security visiting room to give him a hug. He went to a highly touted private high school with her daughter and had been a guest in her home.

Often visitors are acquainted with each other as the two women in front and one behind me were last week. Complaining about jobs at one of our large hospitals, I realized that their relationship was as co-workers. I was in the middle of their conversation, and I heard no mention of the prisoners they were visiting, but none were going to the outside units. A child who held up three fingers when I asked his age accompanied one of them. I played hide and seek around his mother's legs with him for several minutes.

I try to get there earlier or later than the shift change as guards are let in before visitors no matter when they arrive. Some security staff will let two or three of us in between groups of guards, but as the only woman--we are screened by a person of the same sex--staff member was searching the woman in the wheel chair, we missed the space when there was a lull in the guards arriving. The woman with the little boy was at the head of the line at that point, visibly put out, but nothing can be done but wait.

We watch to be sure the woman who runs the computer and prints out our visitors passes is there. She is key. Without her, there will be another slow line waiting for the passes. Those of us who are regulars praise her weekly--and pray that she doesn't get sick! Is the system old and slow? You bet, but the budget doesn't allow for upgrading.

After signing in two books and getting our passes, we go through one, then another gate enclosed in wire, enter another section, show our hand stamp through the window to that guard, and get whatever we are taking our prisoners from the vending machines.  Most visitors are seeing prisoners who can be visited in a large room, usually filled with folks talking and eating. For those of us visiting outside pods, we look for a guard to walk us to our destinations.

Entering Unit Two, the death row pod, there is again a wait, this time for our prisoner friends to be called from inside and allowed through security into the visiting room. The speed of this part depends on the guards inside the pod, and that varies. Recently the older guard, one we all think of highly, went back into the pod to find a guard to let my friend through. Another time, one of the prisoners being visited offered and was allowed to find him for me.

Once in the visiting room, we greet the other visitors and prisoners already there with hugs and handshakes. We greet our prisoner friends with a hug, and sit down for a visit as with any other friend. My friend keeps a box of varied tea which he brings in so I and others can have water heated in the microwave for tea while we are there. The microwave pops a lot of popcorn, a usual treat, while others bring sandwiches that are best heated. The prisoners can bring art or writing out for us to see or read, but we can't take similar things to them.

These men are very different from the young men who killed, mostly on an angry impulse, often under the influence of drugs. Three with whom I'm acquainted have been there more than thirty years and are self-knowledgeable interesting men. My friend writes and does various art projects. He made a lovely bird feeder which he mailed me for Christmas (he didn't remember that I live in a high rise, and I didn't remind him.).

We, the visitors who are part of the death-row visiting team, leave with hearts filled with gratitude and inspiration not to let the small things of life disrupt our peace. 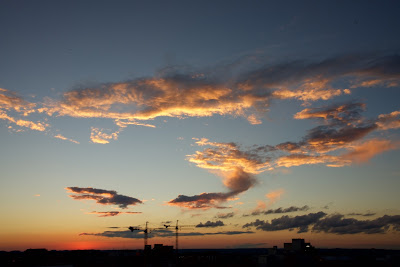 Posted by Maggie at 9:58 AM No comments: 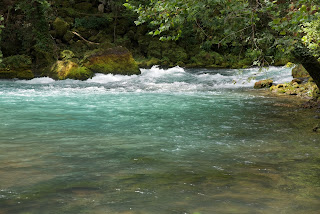 The decision I made when beginning another re-write of my childhood memoir, one in present tense, seemed a reasoned choice. I chose to write from the eyes of nine-year-old me, in the fifth grade at our eight-grade country school. That choice allows me to use earlier experiences in past tense or as flash backs and can grow with me as I write forward. It is a voice that can more easily carry through high school than that of the younger Margaret. And as my NY coaches appear to want, it will make the story more intimate. 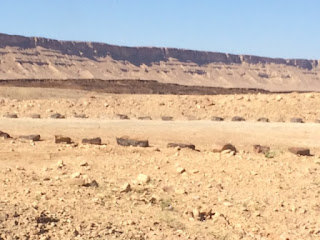 This desert scene, for me, signifies feelings of aloneness, being lost. I must
search for the beauty, but would look hard, it that was what it took to find it.

Now more than 100 pages into the present tense version, I find it easy to bring the early childhood stories into the text but often struggle when writing from that nine-year-old's present feelings and experiences. As I look back and feel where she was, look at a few photographs from that age, I realize that this was a time of great struggle, perhaps even a pivotal time, one where I/she fought through deep sadness and grief, determined not to be a younger version of her sad mother. 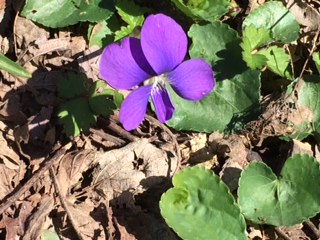 The first violet in our back yard always made me smile!

Being a glass half full person is an important part of who I am. I've always credited that part of me for how I got through the difficulties of childhood. Looking at my nine-year-old self now, I see her battling for a happy place though it was often away from the present moment. I recently told a friend that I realized that I needed to fall in love with that little girl character as much as I love my fictional heroine in my novel so I would look forward to being with her in the writing process. Being with the sadness, the feelings of being trapped, are hard. I am, however, proud of her determination, for finding places and spaces that nurtured, and for caring about her family and friends.

Grace, serendipity, inner knowing, call it what you prefer, but I believe I was led to this age in my childhood to show her struggle, and to allow for release of her deeply held grief and pain. When going home would be difficult no matter whether she went directly from school, I'm proud of her for seeking out the woods and that girl-in-the-pond reflection with whom she could share. I'm sad that she had to endure so much, but grateful for her courage and strength.

I'm grateful that my parents, with their many flaws, never let me doubt that I would go to college, that getting an education was important, though their reasons were different from each other and from mine. While Mother veered from wanting me to have all the books I desired to being hateful about my ability to get lost in a story, her desire for us to have books won that battle. 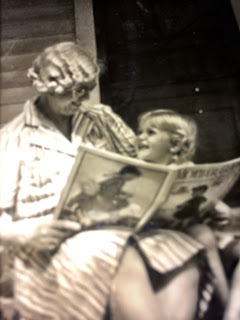 We all need someone to believe that we are precious, wonderful, smart children. I was fortunate to have the Wood cousins, especially the two "old-maid" teachers, who thought I was so special. Both Cousin Edna and Cousin Gertrude made huge differences in my life, but Cousin Gertrude is most memorable. She left the adult conversations, often heated about the world situations and politics, and spent time with Billy and me. My first trip to the big public library in town was with her. My first walks to their neighborhood park, and my first time to be allowed to walk there by myself were her doing. She did her best to get me the clothes her students were wearing--my first sundress, first pair of school jeans, first shorts and mid-rift top, first pleated skirt and more.

I realize that this fits more in the tradition I'm beginning on my website so I will post it there. However, it could be helpful to one of you as well so I'll leave it here too.
Posted by Maggie at 8:37 AM No comments: