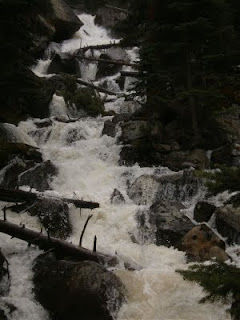 Epiphany-- the definition that I like most is the literary one--a sudden realization--a flash of recognition in which someone or something is seen in a new light.  There are days and weeks when I have several of these and other days when I am bombarded by old messages, many that I need to let float by as if they were clouds.

The past few days have been saddened by a sudden angry outburst and resignation from the board of which I am president, and it appeared that I was the villain.  The person in question is a man--no surprise--and when he refused to answer my e-mails or return phone calls, I envisioned a complete long-term cut-off.  I worried about it so much that I wrote our pastor to ask for prayers (and maybe that helped!).

My mind quickly went to old cut-offs--one from a man who had been not only my significant other, but my daughter's surrogate father--who decided to treat me as if I were dead when we broke up.  It was many years later before he changed his mind.  And like the man who was on the non-profit board, we attended the same church and many of the same functions.  Then, of course, there is the more recent cut-off of communication by my daughter.  I was projecting this man's future behavior on these past experiences.

Those with whom I spoke gave me good advice--let go of my guilt that I had done something to warrant this behavior, let go of my worry, bless him and let go, move on, he can be difficult so don't blame yourself.  No one said just wait a few days and see what happens--or if they did, I didn't absorb it in my own whirling mind as I searched for my mistakes.

There had been a sharp misunderstanding.  I could have been more patient.  I could have sent him more information.  We would have used the same process, but this could have helped.  However, it was a relatively small thing so others involved were shocked at his resignation and anger.  I kept trying to find some bigger transgression that I might have made, obsessing about it even during my centering prayer time.  It had to be something I could have controlled, right?!  No, probably not.  This man had been upset about a variety of things on that board for some time and this must have been the match that lit the already burning fire.

This morning, after hearing that he had told others he had resigned, I wrote a letter of appreciation for his service, said I had enjoyed working with him, etc., and attached it to an e-mail to our entire board with a copy to him.

Mid-morning I received an e-mail from this man.  He asked questions about the board as if he had never been angry.  He did acknowledge that he would no longer have to deal with these things so it wasn't about returning to the board.  Then a little later, after I had wished me well for a planned outpatient surgery later this week, I received a cute response.  This seemed to be about re-establishing the friendship, and to me that is much more important than having him on our board.  It didn't take so long either.

The two insights--perhaps not as bright as an epiphanies, but so important--don't find the worst past examples to project onto current events and don't try so hard to find and accept blame.

The first one I think I will remember.  The second, maybe I'll catch myself as I'm doing it a few times and then move away from that habit.  It's a brighter possibility!

Posted by Maggie at 5:14 PM No comments: