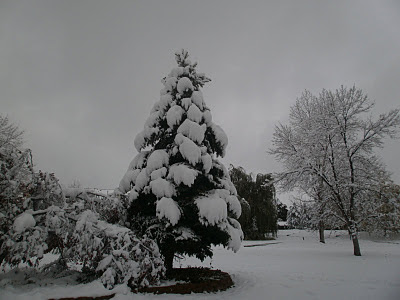 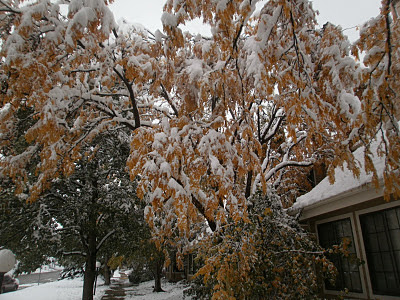 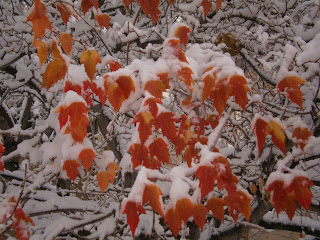 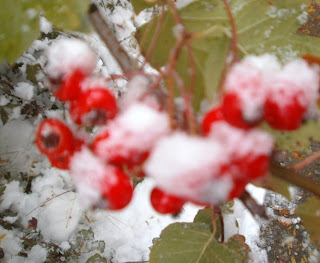 I had to go for a walk, once the sidewalk shovellers came and did their work. And my camera slipped into my pocket just in case. The area with the prettiest trees in our complex was closed off with yellow tape. Tree limbs and deep slush covered the ground. I made my way around and back to the lower part of that area--and on my way I found leaves and berries decorated with snow, works of art waiting to be photographed.

The newscaster said we had a foot of snow in the Boulder area. That was hard to tell since some of it had melted by the time I went for my walk. What was apparent was that the heavy wet snow that done quite a job of trimming the trees and shrubs. Winter's beginning brought temporary beauty. It will leave behind lopsided trees and shrubs with holes. The slick streets we didn't have this morning will come tonight, but most of us can stay at home. Thousands are still without power. Fortunately, mine is on, and I'm snuggling in for the evening. A pumpkin awaits carving--or painting. It's Halloween around the corner.

Posted by Maggie at 3:30 PM No comments:

End of the season -- in Boulder and Boulder County 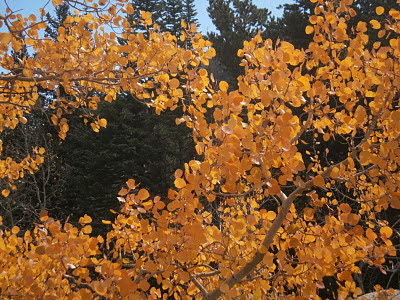 Above Eldora before the rain and snow began. 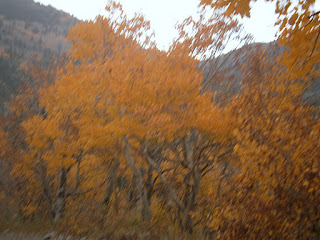 As the rain and snow began, the leaves were shining in a mass and dotting the mountains. 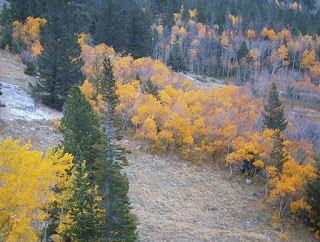 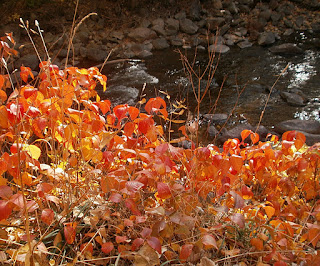 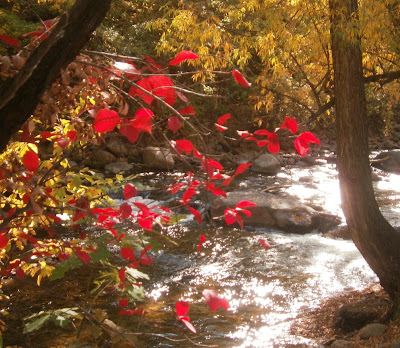 A few red leaves over the creek. 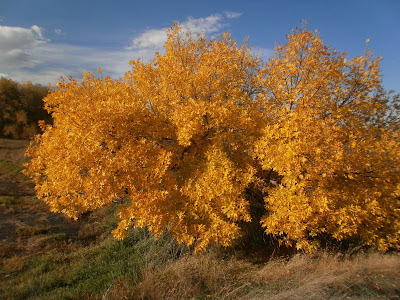 At Walden Ponds, about an eight minute drive from my condo.

Actually I'm a day late. The snow began before midnight and is still falling. I'm going to wait to post photos of the white stuff and share a few of the season that passed last night--that of our fall colors. In Colorado they are mostly yellows and golds with a few touches of red here and there. I have enough fall photos to leave my camera at home next fall, but I probably won't. I am inspired and warmed by the abundant fall color (even though I miss the oaks and maples of Tennessee and Missouri).

This is not the first snow I've encountered this fall. A couple of weeks ago, I drove up Boulder Canyon through Nederland and Eldora and hillsides covered with golden trees. It was a bit past the prime color, but still glorious. A weather front was moving in, and I wanted to catch the color before the rain and wind I expected began. From the Hessie trailhead, I walked farther and higher looking for landmarks and a view of the highest peaks. Clouds had covered the sky as I turned around. I continued to stop for a photo here and there and soon large raindrops were falling on my head--oh yes, and on my jacket and legs too. And as I thought I was going to get wetter than expected, the rain changed to snow. My camera couldn't reproduce the beauty of the large white flakes falling against the golden aspen, but trust me. It was stunning. Yes, by the time I reached the car my tights were wet and my gloves soaked through. The car's heater warmed quickly, and I drove out of the snow before reaching the top of Boulder Canyon.

Many fall days I've spent in daughter Michelle's office. It's a pretty spacious office over their garage, but it's not the same as being outside on a warm fall day. So when I had last Friday afternoon free and took a library book back, I started up the Boulder Creek path, camera in hand. I was only going to walk a few feet up the path, snap two or three photos and return to the car and errands that needed to be done. Two hours plus later I returned to the library parking lot and my car. I felt renewed and joyful as I exchanged pleasantries with others on the path.
I've captioned these photos more than usual, and all were taken in Boulder County. The first ones are at 9,000 + ft, high above Boulder. The creek path meanders through downtown Boulder and the shots taken there were not far from the library. Walden Ponds is a Boulder County open space area near where I live. The way I now reach my photos means I don't always know what I'm uploading. I didn't mean to include the tree from the ponds, but here it is. 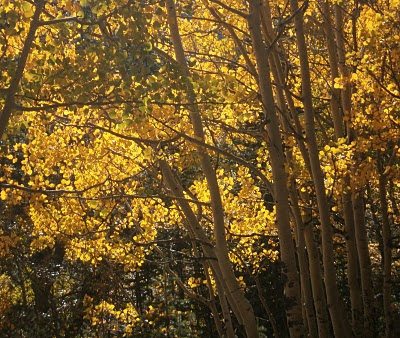 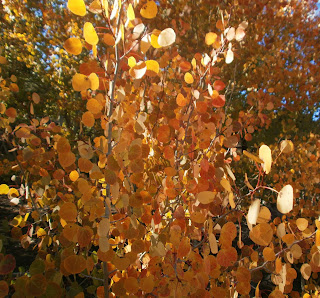 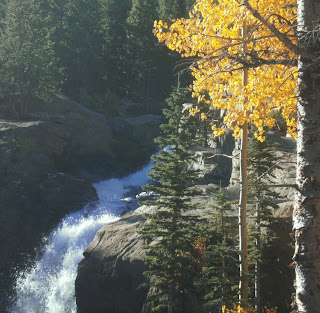 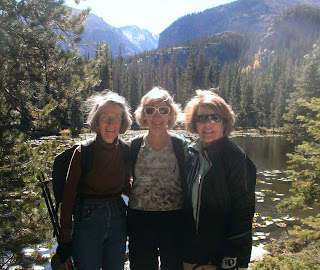 There is nothing better than a fall hike in the mountains with clear blue sky, changing colors and dear friends. I was the fortunate one who had that opportunity on Friday. I was in a terrible mood, had a difficult and exhausting week, and as one of them said, I needed them. Just expressing my frustrations out loud to good listeners made a huge difference. Naturally, it was just the beginning of processing what my current anger was bouncing against from childhood's experiences. It also brought up how I have created and/or supported the situation that now seems too much--how easy it is for me to let my creative work go to support others.

Now for fall's colors. They were and are stunning--yellows, golds, and a touch of red here and there. Our hike took us from Glacier Gorge (RMNP) past Alberta Falls where the waterfall photo was taken. We usually thread our way through the photographers there and move on with our hike (since this is early on the trail to many other favorite places). This time it was worth the challenge to get color and water together in a frame. Earlier in the hike we walked through and under the golden Aspens shown above.

Not all of the forests we hiked through were golden. The part of the trail that was most challenging wound through a forest that was at times mystical and often shrouded with pines, absent aspens that bring fall color. Since we were making a loop, this part of the trail wasn't familiar. Isn't that like life?! Some parts of our journeys are so familiar, so comfortable, maybe too comfortable. Other parts feel foreign.

How could I have stuffed all that anger deep inside? Why did I think that little Margaret, as I refer to my childhood self, was stoic so early in life? Anger is energizing--and also exhausting. It hurts in my guts. I can't tell how long (years) it took for me to quit fighting back with Dad. We could at least sometimes talk. Since Mother couldn't remember the meetings or her angry words, there was no resolution. I often focused on trying to help her, trying to make her feel better. I also tried to protect my heart from her angry words, hurled like arrows aimed to pierce. Eventually, limiting time spent visiting seemed the only way.

As I open my heart easily to nature's beauty, I can recall storms--blinding rain that obscured the highway, the tornado that chased us to the basement, snow piled too high to drive through, shivering cold. Much of life is beautiful too. The storms come and go. Living from our hearts lets in pain that might be repelled. It also opens us to love and beauty that are Divine gifts, gifts that can only be experienced fully from our hearts.

Enjoy fall's colors as they come, wherever you are. Look for life's beauty in small ways. Enjoy the moment. I'm thankful for the gift of friends who provide beauty in my life, whatever the season!

Beauty beyond the pictures 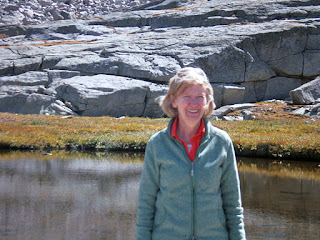 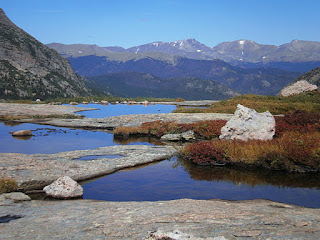 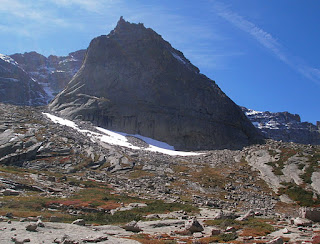 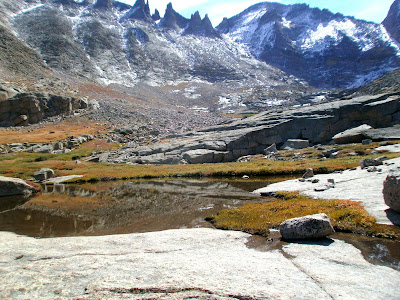 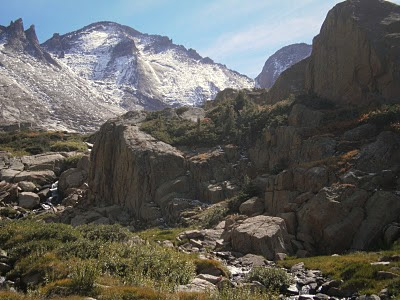 Where were you the last time you saw or experienced something of such beauty that you couldn't imagine recapturing it? It could be the face of a newborn babe or the delight on the face of a child as he/she put forward the latest creation for you to admire. Those are cherished memories.

Nature imprints different but amazing beauty. When we hike in the high meadows (about 11,500 ft.) above Black Lake, I cannot capture, either in words or with my camera, the expansive beauty that enfolds and inspires me. A better camera (or photographer) could provide a clearer representation. Perhaps a panorama might do it justice. And others might find the giant rock formations, slabs and sharp mountain peaks to be intimidating or too barren. The grasses hadn't turned colors in the first section we reached, and the upper ones, as you can see, were turning, but not into the red we enjoyed last year. The skies were blue and the day earlier so the light was rich--outside the shadows leveled by the rock layers.

These meadows are favorites of my hiking companion and me. At this point in our lives, only special places pull up the energy and endurance needed for the 12+ mile hike and 2000+ elevation gain, much of it in the last mile or so. The feel of being there, mostly without another human being in sight, in the midst of such grandeur is exhilarating--even on a day when my energy wasn't high. We didn't go on to Frozen Lake, our intended destination, since it was obvious that snow and ice awaited us there. On other years or days, we would have pushed on. This year when we reached the lovely tarns, we decided to eat lunch and enjoy the beauty surrounding us. The named lakes at the edges of these meadows are barren. The tarns, lovely.

If you look at the pictures from the one just above the narrative, that is where we began our tromp up and around the meadows. The second, with Long's Peak in the background, was after we had climbed around and up above the rock wall in the 1st photo. The tarns are across from the Spearhead (pointed rock), and the photo of me is facing the opposite direction from the tarns. Does that make you feel as if you are situated with us eating lunch? Unlikely. However, it's the best I can do.

Here's to making memories that can be pulled to enjoy on days when we need inspiration! Thanks for sharing mine.
Posted by Maggie at 8:35 AM No comments: