My most recent blogs have been more about darkness than light so I wanted to share spring flowers and the beauty of this wonderful area this morning.  A newer friend and I saw the sugar bowls on a hike last Friday, timed, I must admit to find this early spring flowers--and we did, more of them than I had ever before seen.

I was more enthralled than my friend.  She saw them with interest the first and second time I pointed them out.  After that, they were old hat.

I am reminded of how many times I think, "oh I've seen that before, done that" without recognizing that I am a different person today than I was when I saw, did whatever before.  I can easily say that about seeing the sugar bowls last year when I went alone primarily to photograph the spring flowers on that trail--or the year before that when I took a friend who hadn't been on that trail to see the wildflowers.  And the first time I went the year before that with the local Open Space Parks ranger who told us all about the area, just opened to hikers, and the flowers, rocks, trees, and mountains along the way

And yet--I am also the same in many ways.  I still live in the small condo/apartment and have looked forward to the pool's opening.  I enjoyed spending Sunday afternoon there reading with a little time in the water, greeting a few fellow pool sitters I hadn't seen since last year.

I've shed some volunteer tasks and taken on others.  And my inner healing journey has deepened.  (I'll say more about that in the next post.)

The flowers looked more beautiful--partly because of the long, late spring with snows and cold.  The mountain vistas were clearer.  The friends with whom I shared more dear, especially the one in whose back yard I stood to take many stitched together panorama photos of the mountains.  Perhaps it is because I am older.  Perhaps it is because I think of moving back to the Tennessee hills.  Through whatever darkness--the clouds, my inner journey, the difficulties of family and friends--to enjoy the beauty with which I am surrounded.

Happy Spring!
Posted by Maggie at 10:03 AM No comments: 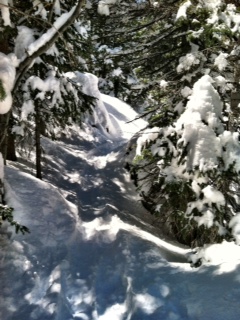 There is a trail through that deep snow.  It's mostly one snowshoe track to another, but it's there.  As I trekked up the fire trail toward the Mills Lake/Loch junction through snow that was so deep that I had to raise  each foot up several inches in order to put one down in the next track, I was glad it was a bright sunny day.  I was in the shadows a lot, but the sun was shining.

It was like the recent weeks' have been, a lot of the time has been spend with dark memories, dark pain--and my dark side, but I know that bringing those experiences and pain to the surface allows God's light--the best--to shine on them for healing.  And the steps are, like those on the trail, sometimes high--and I can't see what's through the trees or around the next curve.

Another part of the winter trail experience was that I went out for this snowshoe alone--and I didn't see anyone as I stopped and started up the fire trail (and it's the one most used in the winter).  I would learn that there was enough snow on the summer trail, and that those few who were out were on it--spring tourists for the most part.  The hardest journeys are those inside and are journeys of faith--between us and God or as the 12-steppers say, our higher powers.  It would have been good to share the snowshoe; however, I noticed little things that I might not have seen had I been talking or looking out for my companion of this year's snow hikes. 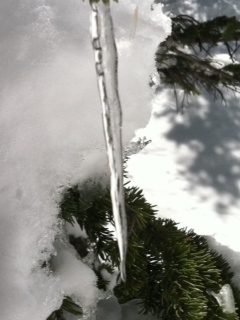 The same is true of my spiritual journey.  When I am busy, busy
with my various commitments and don't stop and listen and see, I am apt to get lost or miss the signs along the way.  So as I muse about having a special companion--or having others with whom to share the spiritual journey in ways I don't now have, I remember that much of that work is done in silence.

My I-phone didn't capture the sparkle of the icicles.  They were lovely.  And I know I have photos of some cascading down the rocks below from other years in the spring's melt, but each year they are different--as different as the insights from old stuff I have previously visited at some level. 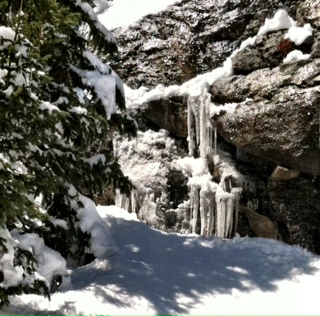 As I started down the summer trail, I met the two men I had seen at the trail head coming up the trail.  They asked how I got there before they did as they were unfamiliar with the trail I had taken.  That is not a question I get in life.  Instead, the question is more likely to be, "Haven't you handled all that stuff before?  Aren't you done?"  I am looking forward to spring flowers, and this week's rain should bring them out.  I'm hopeful that with the flowers, a leveling off will come; but the answer is 'no."  This is a lifetime journey with lots of grace notes along the way.

Last Friday I had set out to snowshoe to The Loch, a favorite I've missed this season.  I did not attempt the final leg, as there were many "hills" that aren't usually there as I hiked up the fire trail.  I had a time deadline in Boulder too, and that handled any wild ideas of a big push--one I sometimes get after a brief rest.  I now avoid--most of the time--having goals in mind as I travel the spiritual journey.   I used to say, "I'm almost through with this or that."  Some of you remember those days.  Now, as I break open another big piece as I did earlier this week, I know that it will spin and unravel many skeins before it can be cleared away and another piece moves into the upward pattern.  Co-leading the St. John's Healing Ministry Discernment Group is probably not the way to have a smooth road upon which to travel--but who says that smooth is the best?!  Exercising those spiritual muscles must be as good for us as that of exercising our body's muscles.
Until next time--with hope that the photos won't be of snow! 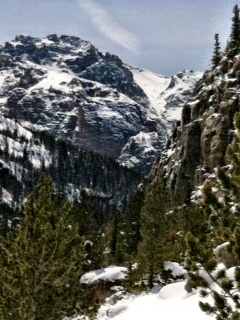 Posted by Maggie at 9:34 AM No comments:


Yes, the sun is brightly shining!  It was still nippy (41 degrees) when I went for a walk about 4 pm.  Enough of Tuesday night and Wednesday's 10.5" of snow had fallen from the trees that I could walk under the big pines that are just outside my condo without fear of a big clump of the white stuff falling on my head (as it did earlier when I went to the mailbox).  Tomorrow it is supposed to reach 50!

April and May are usually in-between months for hiking in this area, particularly in the near mountains--mud season as snow melts and water runs in streams down the trails.  I'm having withdrawal symptoms as I haven't been out snowshoeing for almost three weeks.  I've even resorted to the StairMaster at the Y for aerobic exercise since I'm there for Pilates twice a week.  (Oh yes, I feel rather righteous about the Reformer Pilates I've been doing twice a week, going no matter what.)

In between--that's how my life feels right now.  I feel as if I know what I'm called to do, yet the how, where and when are elusive.  The friend who offered to connect me with a Utah community has now fled this fickle spring for a warmer climate, not to return until June.  If any of you want to be on my prayer team--the request is for me to see the "how to begin" soon.  A "where" would be good too.  My young priest-to-be (soon) friend said that he knows God is doing something good in my life.  I'd like to know what that is!

My in-between season has been marked by huge bouts of grief--pain too, but largely grief.  The darkness of snowy days and cold have made this spring perfect for dark revelations.  Befriending the teenager in me who was angry and determined to make it through those years and to see retribution has allowed the grief and loneliness to come to the surface.  Now I'm the one who is always saying that bringing the pain to the surface so that God can heal is the important work.  Right!?  I know that to be true--and I know it to bring on deep fatigue too.  It has sometimes seemed too much and too lonely--and I have remembered that even if I were in contact with my daughter, she wouldn't want to know about any of this.  You may not want to know about it too--but you can click a computer button and disengage.

My lack of energy to do more than my commitments (oh yes, they are sometimes a bit much) has been forcing me to do this grief and loneliness work.  Now I'm looking outside at the sunny (still cold) day and awaiting the spring flowers.  I know they will come!

Golden Banner from Goshawk Trail near Boulder in April, 2012 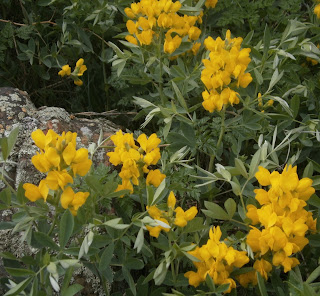 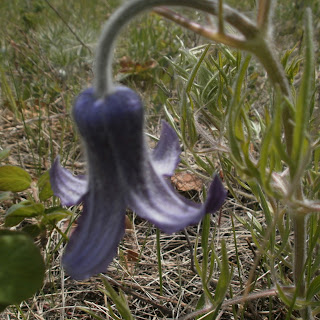 Sugarbowls -- also from last year
Posted by Maggie at 5:18 PM No comments: