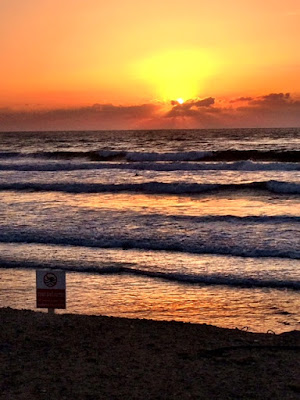 Sunset on the Mediterranean in Tel Aviv


It's been too long since I've written, but once again, I'm compelled to write about the loss of a friend, Hilda Ratner, who died peacefully on Thursday afternoon with several gathered as or immediately after she moved on from us. I chose the photo above as Hilda was a Jew, though her religious home
was the Unitarian Universalist Church, and when I shared my photo book from last year's Israel trip, she especially liked this picture of the sea. She spent many weeks of vacation walking on beaches, particularly the one at Hilton Head where she had a time share, and where one summer I walked with her.

Hilda was my older (90 on March 6th) friend whom I visited each holiday or other visit when coming from Colorado to Nashville. She had a stroke seventeen years ago as I was driving to Colorado and had found a wonderful assisted living facility near where each of us had lived in which to make her home for the last dozen or so years. Her 90th birthday party was a wonderful time, but it also marked the beginning of her body giving way. 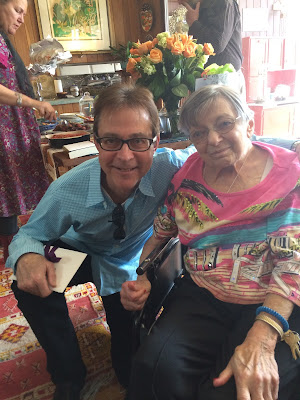 Hilda at her 90th birthday party with Phil Ryan, a friend who also worked for me years ago at Economic and Community Development. Kathy Bryant, the hostess, is in the background at the table.

In her remembrance on Facebook, Kathy said it well--Hilda could get us to hear things about ourselves that no one else could--about a time when I drank too much at a Unitarian Singles Party (I first met her at one!), and she worried about my driving home, she said, "If you have to drink that much to be at the party, maybe you should stay home. That's what I do." Another time she warned me about a good friend, and another she quoted her delightful husband, Aaron, saying after meeting a new man in my life, "there she goes again, thinking this man is wonderful--and we know it won't be long before she won't know what she saw in him." He was right about that one--and the pattern as well!

Hilda could listen and hear more than I realized I had said. Then she would say back, "so you're saying . . . or it's interesting that you see . . .. Though Hilda credited her attendance at EST, Werner Erhard's program, with transforming her relationship with her mother, and encouraged me to participate in The Forum, EST's successor program (which is now embedded in Landmark), I don't believe she ever participated in any of the communications programs that suggested that approach in listening. I am reminded how effective it can be as I write.

I was not one of her "girls," younger women whom she mentored and mothered (no birth children), nor was I one of the "old girls," women who were her contemporaries and who had known her longer, nor was I a work associate. We came together partly because we were single, then because the men in our lives were friends, partly because we were both involved in the finances of the UU Church in Nashville in the late 70's and 80's, and perhaps more, because there was simply a connection between us.

I am blessed to have been here and visited her in the Alive Hospice facility where she died, and to have had good conversations with her there. During one of our last visits, she asked if there was positive movement with my daughter. When I said, no, she shook her head, sadness in her eyes. This
concern was typical, even though her days were difficult much of these last weeks.

Some of her wisdom resides in my head. Her buddy bear resides beside my own, and her Mexican fish on my living room window ledge. Many memories from our years of friendship have floated back during these last weeks of her life.

I was privileged to know and have Hilda as a friend and to be there on Thursday afternoon to send her body off. I have to break the habit of thinking about what time I can go by to see her, but am glad she suffers no more. 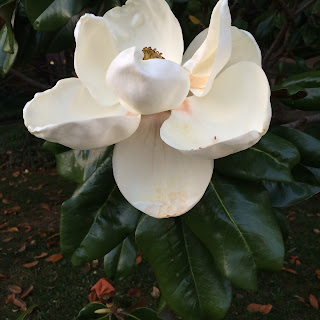 Posted by Maggie at 1:16 PM No comments: