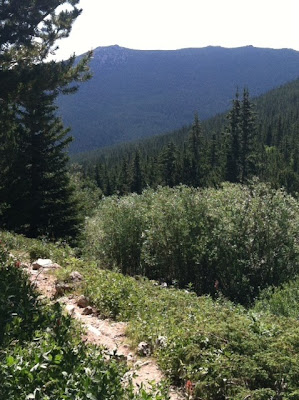 The trail and view from my "going it alone" hike last Friday--and can you see how rocky the trail is!
St. Vrain Mountain trail.

A dream that wouldn't let go is one I've found that I need to wrestle with, and this early morning's dream was about what feels to be my "work" call.  I was visiting a group to whom I was scheduled to speak--a group in a sophisticated Methodist church in Nashville.  A friend had gone with me.  I didn't get to the group's Sunday evening meeting until after they had begun.  I was tip-toeing around, timid.  I met their associate who mentored the group and didn't say that I was scheduled to speak--just something silly about being Episcopalian in a Methodist church.  Afterward he disappeared, and I talked to the two women group leaders.  One said, "I thought that was who you were." when I said I was scheduled to speak later.  The other asked if I usually gave my talks in my home!  That was how I was showing up.  Little lady, not a professional speaker or program leader--timid and unsure.

Fast forward -- I'm giving the program to that same group.  I begin with hesitation, stumbling over my beginning.  I'm combing through my written program notes at the same time.  I assumed that I would remember and hadn't reviewed.  After the false start however, I get it together and everything works.  Afterward participants are moved, excited, have something to take away in their own life's journey.  I'm asked who is doing my future scheduling.  Who is supporting me in my efforts?  My son is there (very odd) and says he is the only one.  He would be happy for some help.  Some elusive (vague in the dream) person offers support.  The dream ends as I talk about how I want to speak to mental health groups and those offered for sexual abuse survivors. 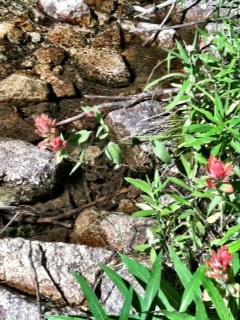 Perhaps a few flowers will grow among the rocks and streams of life.

My long-time Jungian-trained psychoanalyst and spiritual director emphasized that dreams always hold information for the future.  This one feels loaded.  And it fits with where I am--feeling hesitant as I carve out small pieces of time to attempt to schedule future programs.  I might easily sound like the woman who gives programs in her home (not bad if you are a priest as one here is since all know that she can speak anywhere).  And I am often so sure that the right words will come that I skimp on preparation.

Support -- I need to be open to the support I need being available.  And the inner support is too.  It's those self-diminishing voices in my head that I need to ignore.  And that voice that says, "You are alone.  There's no one who wants to help."  It's a childhood voice.  I know that.  But then I was so sure about writing the memoir and that it had a place in the world--and after all these years, that place hasn't been found.  It has shaken my confidence in my "work." 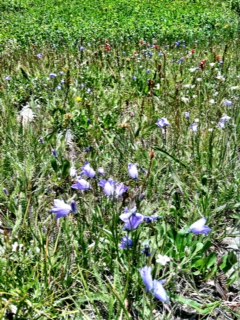 The "flowers" growing may be many but not so easy to see.  (mountain harebell bellflowers)

At a recent healing prayer group meeting, one of the members prayed for me asking that I know which things I needed to let go of and let them float away.  I knew at the time that there was wisdom in those words.  It appears that feeling a lack in what I have to offer is a big one.  The Spirit wouldn't call me to do something that wasn't mine to do--and that wasn't of value to others.  And at age seventy-five, the time must be now!

Thanks for being with me in my debrief. 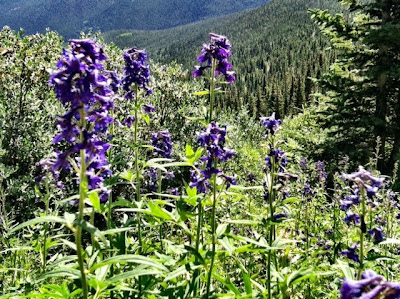 A few may sprout and blossom in tough terrain!
(subalpine larkspur)
Posted by Maggie at 8:54 AM No comments: