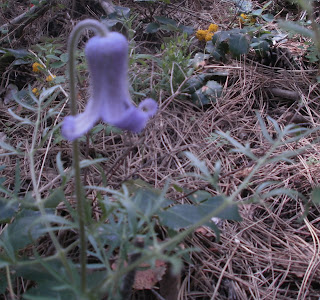 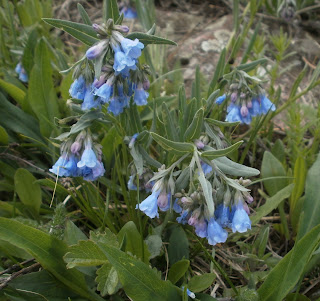 A hike I didn't start out to complete yesterday became engrossing because of the variety of wildflowers that dotted the hillsides and meadows.  Later there will be more flowers, but few additional varieties and the pasque flowers and sugar bowls will have completed their blossoming.  I went to the Goshawk Ridge Trail near Eldorado Springs, CO, about 8 miles south of Boulder thinking that the sugar bowls might possibly be out.  Their blooming season is shorter than most of the wildflowers in this area, and I didn't want to miss them.

Approaching the first bend in the road, I wondered at the burst of yellow.  As I neared there were wild iris too--and the yellow was a hillside of golden banner.  Farther into the hike I would find meadows and fields filled with golden banner, a wildflower I think of as belonging in the higher mountains.  I'll still appreciate its setting there, but enjoyed the splashes of yellow in the fields yesterday.  The lance-leafed chiming bells were profuse and their blue bright against the hills and grasses.  Chokecherry bushes provided blossoms and perfumed the nearby air.  And as I looked at iris in a hilly meadow, I spied--yes.  Sugar Bowls.  They were smaller than I remembered, but they were there.  I climbed a hillside that seemed steeper than it feels coming down, the usual approach to that part of the trail.  I was doing it backward, intending to reach the blossoms and then to turn around and go back.

I was startled by a loud chugging noise.  Where was it coming from?  It sounded like a train, but there was nowhere for train tracks was there?  Then I looked up at the mountainside high above and what appeared to my eyes to be a toy-sized train was snaking through the trees.  My camera doesn't have a long zoom and the photo below doesn't show the perspective from which I looked but I wanted to show the top of the mountain.  You get a bit of the idea, right?!

Golden banner on the hillside. 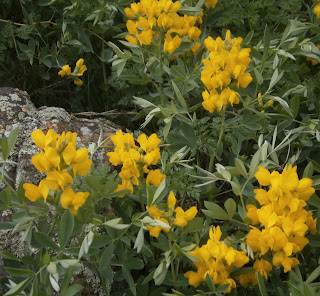 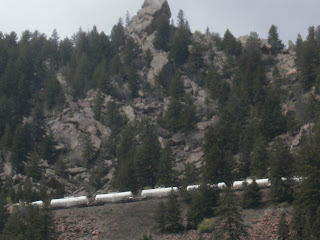 A first paintbrush (orange) delighted me.  I found a wonderful rock near bright blue-purple larkspur and stopped for a snack, deciding whether to go on.  I was near the top of that hill climb, but had not yet reached the stream and hillside where I was accustomed to finding pasque flowers and sugar bowls.  Would they be bigger, more of them, than those I had found?  After a short rest, I resumed my hike.  Yes, it was farther to that stream and hillside, down a steep hill and up another, and I was rewarded with more and yes, bigger sugar bowls and pasque flowers (these are taller than in the mountains) than those I had seen earlier.  By that time I was much closer to the beginning of the trail through the woods and down the road than going back the way I came.  My reward was to find those fields of golden banner and penstemon along the roadside.  I posted photos of many of the flowers on Facebook, and will put only a few here.  It was a rewarding couple of hours with few people to interrupt my reverie.  (And now I will have no excuse to keep me from my new book proposal in the morning.)

NOTE:  This is a new blog format, and I'm just discovering how it works.  The photo settings are completely different.
Chokecherry bushes behind the rocks 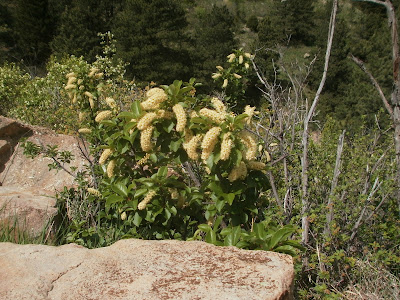 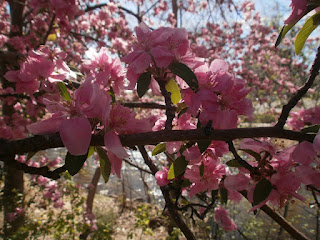 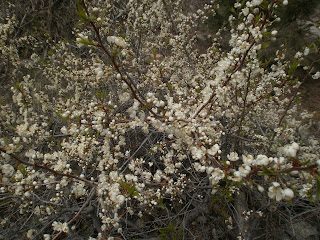 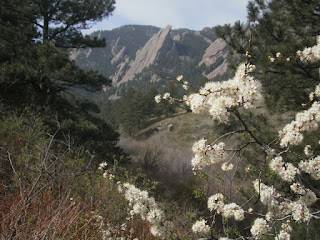 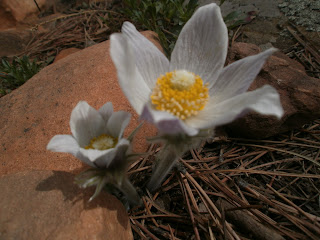 It's April, and you might think you were in Tennessee with all the blossoms--even some trees beginning to drop the blooms for leaves. And more leaves are coming out each day.

The World Affairs Conference, CU's traditional (64th year) blend of talks and panels from scholars, scientists, artists, political commentators, and activists of all stripes is this week--five days filled with more than my brain could take in. Yesterday the creativity panel (in arts and science) reminded that a regular practice is needed for skill building--and for the blossoming of creativity in all endeavors. I've been neglecting my writing this winter so it was a good reminder. No, I won't practice on this forum daily, but will be more intentional about an early morning writing practice. Hopefully, I can also set aside one day when I do little but write.

The next speaker I heard, after a CASA board meeting, was a political writer and speaker. Though saying much that appealed to Boulder's liberal audience, he was willing to poke on both sides of the political aisle. He commented that in the fall, we would have a choice of presidental candidates--between the Tin Man and the Wizard, hidden behind the curtain, noting that what we needed was a leader with courage.

After that was the brain series, and I hope for another opportunity to hear two of those panelists for what they spoke of was changing our brain patterns in positive ways that aren't difficult. The woman shared her work in Haiti--how she asked children what imagine came to mind (a scary one) about the earthquake. Then she asked them to visualize a memory that made them feel happy and secure. She taught them to go to that memory whenever they felt anxious. Later an elementary school student of hers came back to tell her that she had taught her class this exercise. Talk about changing the world one person at a time, what an inspiration.
PS: And last night (Tuesday), the annual WAC jazz concert was amazing and delightful. However, it didn't have much to do with traditional jazz.

This morning's time is up, and I must get ready to go help Sam's substitute teacher as her literacy volunteer. Tonight is the WAC jazz concert, sure to be delightful and fun.
Posted by Maggie at 7:38 AM No comments: