This Unusual and Trying Time 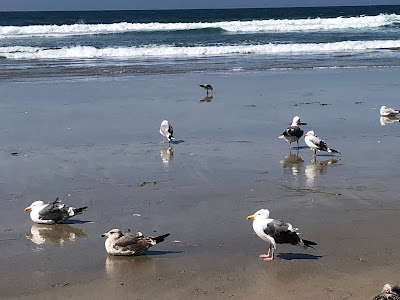 The birds on this California beach weren't afraid, not even of we humans walking near them. This beach walk with a dear college friend was one of several I took while on a week-long visiting friends and family from San Diego to Santa Barbara with a wonderful day in the middle with grandson Ben Means. Leaving the tornado destruction in Nashville behind on March 3rd, I felt no fear flying on a full plane from Nashville directly to San Diego. The beaches weren't crowded nor were the lovely Japanese, meditation and botanic gardens we visited. By Friday my friend's son, who planned a family trip to the San Diego Zoo on Saturday was concerned and we ultimately decided not to go mainly because my friend has Parkinson's. 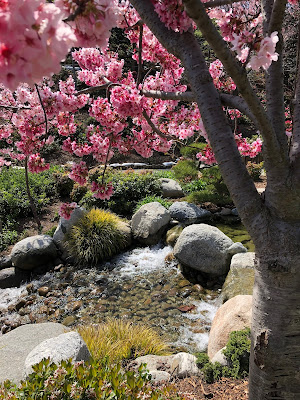 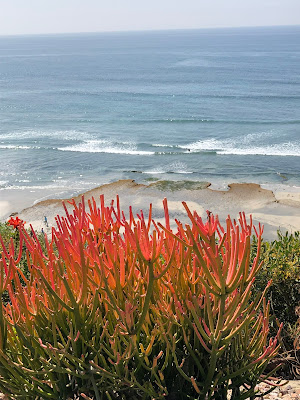 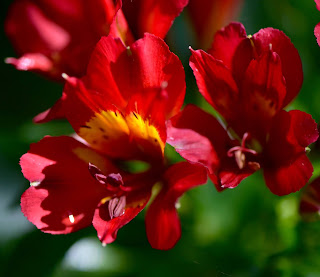 The cherry blossoms were at their peak in Balboa Park's Japanese Gardens and my friends sat comfortably while I meandered among the trees and blossoms.

Those of you who are Facebook friends saw the middle one of the flowers and ocean from the Meditation Gardens, one of the loveliest place we visited during my San Diego area visit.

The bottom blossom was taken near the end of a couple of hours in the San Diego Botanic gardens because the light was perfect. Fortunately that garden is in Encinitas near my friend's home as is the Meditation Garden founded by a Kriya Yoga guru. We saw people meditating, one man who looked like a statue shining in the sun. It was tempting to take his photo but I resisted.

An early Sunday morning bus since Amtrak tracks were under construction on weekends took me to Irvine where I caught the train on into LA. Ben met me at Union Station and we moved on to the strange--and likely not the safest from the virus--Airbnb where I had paid for my night. Ben took my bag and backpack up the stairs where we found room 7, the room the small woman who spoke little English said was mine for the night. I was glad to see it through Ben's eyes. He said, "Looks good Nana." The single bed had no top sheet although two comforters that smelled clean sat on top. The room was clean and near public transportation that easily got us to the Miracle Mile where Ben lives and took me to Union Station for my Amtrak the near morning. But there were 8 little rooms, others filled with young people, mostly Asian since this was in Koreatown. There were no parent-aged folks much less grandmothers. Three bathrooms were shared, clean and I never had difficulty accessing the one straight across from my bedroom though I heard the door open and close several times. I avoided the shower since I had one that morning and could take one at the motel in Santa Barbara, and I did figure out the unusual Keurig for coffee.

No trains were crowded nor the bus to catch the train but by that time folks were beginning to be more careful except for loading and unloading at stops. Amtrak allows very little time to make your entrance or exit so it's a necessity to be ready. As I had a heavy backpack, the car attendant noticed and carried my bag down the stairs for unloading in Santa Barbara where I was met by my friend.

I can't get to the photos I want of LA and Santa Barbara now so will end this post, add LA photos later and keep Santa Barbara for another post. 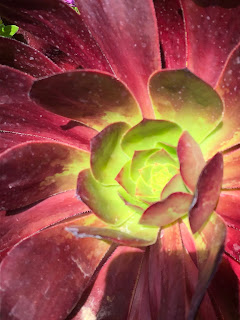 I am cheered by the wonderful flower pictures I had the privilege of taking in California as I was cheered by the tulips and other flowers on our Belmont University campus during a Sunday afternoon walk. Today it's raining and one of the few times I wish for drapes to hid my outside view. But then I might feel claustrophobic without them. I am so very grateful for the views during this time of staying in and I'm grateful to be outside and walk most days, even getting wet or damp a couple of times but today I'm in.

I listened this morning to Jim Finley's podcast on Turning to the Mystics (all you need to know is that name to Google it) which is this week and for the next few addressing our current fears. Jim is my favorite trauma and faith guru and was speaking from his home in CA less than a week after his beloved wife died. I was moved by his dedication and he said at the end that it helped him to be able to help others through this difficult time. This podcast relied on his Christian faith although he's been influenced by the Dharma too.

I also recommend In the Footsteps of Thich Nhat Hanh which Lion's Roar is presenting free starting tomorrow through Sunday. The pre-recorded sessions are for use on your own time but each day is available only for the next 48 hours.

Now to my editing/writing project! Be safe!
In peace 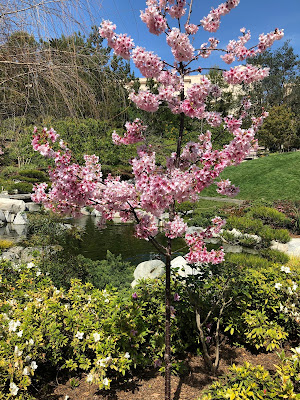