Scrambles Up and Over -- and Partners on the Way 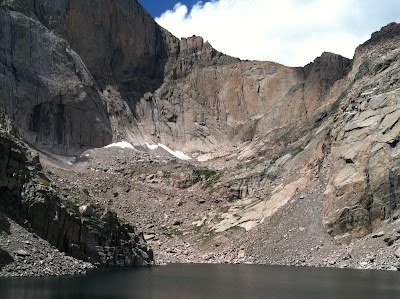 Early this morning I was musing about my good fortune with two recent hikes--Chasm Lake and yesterday's Lake of Glass/Sky Pond.  Both are hikes that require "scrambles" up and over rock faces, the one yesterday over wet rocks.  They aren't hikes to take without a good partner.  That's because those "scrambles" up and over the rock ledges are for me, a stretch.  A first glance as I looked at the wet boulders in front of me yesterday, I didn't see a foothold that I could reach.  They were there.  I'd done this hike so I knew I could do it.  I'd needed my hiking companion when I'd done it in other years, and I definitely needed a companion up in front this time around. 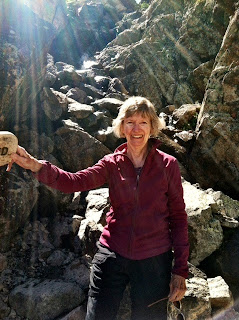 The "scramble" up to the lakes is behind me.

A companion who was confident supported my confidence.  And she was sure that I could do it too.  Our third companion decided that this part of the hike was not for him.  He waited and was there with the intent of catching us if we fell on the way down.  More about those who catch us when we fall later. 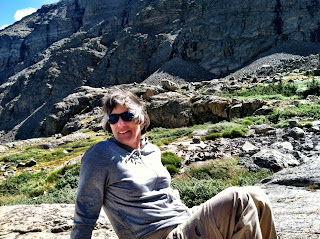 My companion (Colleen) with the Lake of Glass meadow behind her.


I looked back at photographs of hikes before I'd gone digital.  They were from our big hike years of 2001 and 2004--nine and eleven years ago.  There have been a few challenging hikes since that time, but not as many.

It made me wonder about those scrambles in my life too.  In 2001, and even in 2004, I believed in my memoir.  I believed it was a book I was supposed to write, and I believed it was supposed to be published--not by me, as in self-publishing, but by a trusted publisher.  My Holy Spirit guide tells me still that this is true, but with all the stops and starts in procuring an agent, I am reluctant to take that on as I did before--as a job that I worked regularly.

I have also believed I had a healing message to get out to those who have been seriously abused, especially those with a background similar to mine.  However, the easiest path to talks has been to speak to church or spiritual groups.  I've enjoyed doing that, and others have been touched, moved and gained insights.  But they haven't easily led to more talks.  That may be a message--or it could be that I haven't tried hard enough.
I remember a woman priest saying to me a decade ago that my ministry would always be to those most wounded.  While I have believed that, I haven't made real movement in that direction.

I believe in the cause that has taken a lot of my energy in the past four and a half years--our local CASA agency supporting abused and neglected children.  We do good work, and I believe I have made worthy contributions.  The thing is--couldn't those contributions have been made by others?  Realizing that deeply is what led me to say I wouldn't commit to another year as president of that board.  Letting go of that job at the end of this month is a journey, as letting go always is.

So I'm saying, "Here I am, Lord."  I'm ready to do what only I can do, what you have me here to do.  I'm saying this knowing that the Spirit is with me and will serve as a confirming guide.  I'm also saying this knowing that the partnership I need isn't visible.  That's not saying I don't have friends who support what I believe I'm to do--and think they know how I should publish the book!  They'll say "great" if (or when?!) it happens, and a couple of them will listen occasionally as I make my way through the process.  But a partner is more than that, and a partner is needed.  That partner needs to believe with me (even when I'm not so sure) and be there, maybe not to catch falls along the way, but to soften them.  I might need to make a similar commitment in turn.  Wonder what that would look like?

This is a "scramble" that I'm making room for, I don't know what the journey looks like from here on.  I can't see to the next steps.  It seems to be this part of life's scramble for me. 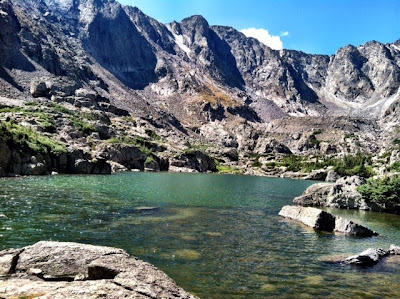