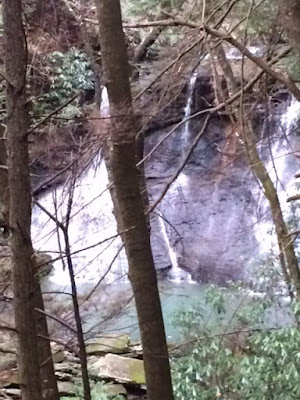 It's not a falls in RMNP or the Indian Peaks Wilderness, but one in the Cumberland Mountains of Tennessee. To my surprise, this area is a National Wild River Refuge managed by the National Park Service.  On their posting for the area, it says that this land is much the same as it was when the first white settlers visited in the 1700s. It is about an hour off the interstate from Crossville, TN. The NPS says that the land was too poor for even subsistence farming so while fishing and hunting in the area helped settlers with their food supply, few lived nearby. Water sports dominate during the season these days. We saw winter kayakers both put in and take out after several hours on the white water river they had to themselves.

Although meeting a group of mostly strangers in a Kroger parking lot in a part of the Metro area that's not familiar in the dark of 6 am is not my idea of how to begin a wonderful Saturday, it often is the starting point for East Tennessee hikes when a distance drive is required to reach the hiking area. So---I set my phone for two wake-up alarms a few minutes apart and slept completely through the first one. I arrived at the large parking lot with no idea what type vehicles I was searching the lot to find. Two Metro cops sitting side-by-side chatting turned to stare as I slowed to look around. I lowered my window and explained that I would be cruising the lot for my hiking group. A man from last fall's hike at Rock Island State Park was coming and had offered to drive. He expected me, but I saw him no where. Then I saw two cars with men sitting inside and pulled up beside one. Yes, they were the hikers. My acquaintance and his new girl friend came a few minutes later, and we were on our way--me riding in the middle between two men I'd just met.

As I read what I've just written, I'll have to admit that it took a certain amount of gumption to set out on that hike. I did consider canceling more than once. Since it was a meetup group, I would have needed to let the leader know I wasn't coming. 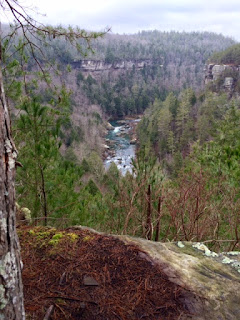 When I chose this hike, I didn't know how beautiful it would be. I chose partly because it was a reasonable distance--about 6 miles more or less--and most of all because the hike leader promised time to enjoy the views! Many of the meetups say that you must be able to hike fast, or moderately fast with little or no time to enjoy the surroundings. This one promised to be different. It was. Our leader knew each and every place to stop since he grew up in the county seat a few miles away. Sometimes one knows both too much and not enough as was the case with our leader.  He took us away from the trails for views. Great! Some followed him to a point where the ladder below was visible. We hiked to his lunch spot where I took the photo above, ate a leisurely lunch and enjoyed views and took photos. Younger hikers asked about the ladder. He promised that on the way back, we would stop and perhaps those who wanted, could go down the ladder, which might not have been a bad decision had he made it clear that everyone who climbed down would need to climb back up. Even then it would have required patience and waiting from the remaining hikers. However, when we reached the ladder, he told those who wanted to go down that there was another trail below. He warned of big boulders to climb over but that only made the trek sound more exciting. Five of us, including the leader, chose not to take the ladder down. (I took the photo below from a hiker who did go down the ladder.) 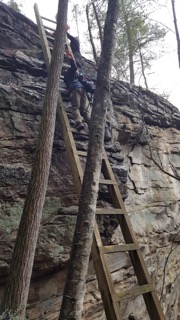 When the last person who wanted to go was safely on the ladder going down, the five of us went on our way, expecting to wait and meet the others at a place our leader named and that all knew since we had passed it on our way up. What our leader didn't know was that at the bottom, those folks would discover no trail! After some exploring to be sure they weren't missing it, there was a move to climb back up. One woman said she couldn't because of her knees. A hiking leader friend said, when I told him about this, that he would have been insistent that she try it--and would have helped her along. However, the man who professed to be a hike leader (in training at least) with them had no such leadership skills.  And our hike leader--he later admitted that he hadn't been on that lower trail in five or six years (maybe longer?!).

We got to the meeting place. We waited. One or another went back on the trail they were supposedly taking to look. There was a lot of ice along the trail under the bluff. Those folks were going to have a hard time.  We would wait. . . wait. Concerned . . . concerned. Getting cold from standing still, the other woman and I walked on 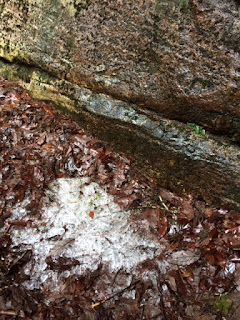 down the trail and back. We waited again. Then she was too cold, her boy friend agreed, and we left the leader and another man to wait while we headed to the final lookout and the car--with heat. At the lookout's wide view, we saw colors moving along the riverbank far below. We looked harder. Yes, it was some of our group. The man went back to tell the leader where our hikers were. We went to the car to get warm. It had been an hour's wait and would be another hour of waiting, but the second hour was spent in a warm vehicle. Our driver said that on any future group hike, he would insist that those who rode with him stay together since we were waiting on only one of our occupants. The leader was with us too, and we weren't sparing as we told him how he shouldn't have let the group separate. A quiet mild-mannered man, he first said that he couldn't have told them they couldn't take the ladder and that trail, but after a few more minutes of conversation, he reluctantly agreed. We had great views without even going out to the spot where the ladder could be seen.

I wouldn't have missed the hike though think it likely that the my cold germs got a boost from getting chilled while waiting in the damp woods. By Sunday afternoon, my nose was dripping steadily as I sat in the theater watching our Shakespeare company's production of King Lear.

I am going on a February hike a few miles farther into that area with the same leader. I asked if there was any way, on the upcoming hike, for the hikers to separate into more than fast hikers and slower ones going up the same trail. He said no, that we would all be on the same trail. His route to the lookout on that mountain is shorter than the others posted and his gait slower so I've left my name on the list. He promised to cancel if there is rain or snow or if the trail is snow covered. 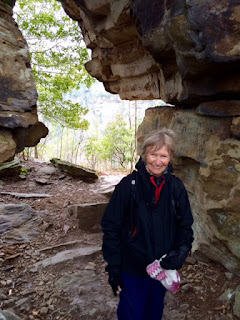 This arch is about 50 feet from top to bottom. The trail didn't go through it, but the stopping point off the main trail was another of our leader's lovely detours. The rhododendron bushes were thick in those forests, and I can imagine a flower hike there in the spring!

YES--I am posting this without photos of yesterday's 7" snow here in Nashville. That's another story!

Posted by Maggie at 7:33 AM No comments:

Remembering the Sparkle that was Lynn! 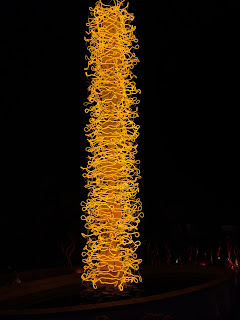 This sparkly lit glass tower from the Chihuly exhibit we saw at the Denver Botanic Gardens a year ago last fall reminds me of my friend, Lynn, whom we lost two weeks ago tonight. Lynn sparkled in ways that weren't always noticeable, standing beside and supporting her husband in his role as arts benefactor. However, as I looked through her closet on Thursday, heeding her husband's "see what you can use," I was reminded of how much she enjoyed sparkly clothes. Her height and carriage--she and her sister practiced walking with books on their heads to embrace their heights--kept those sparkling jackets from overshadowing her lovely face and winning smile.

One of Lynn's favorite activities was modeling for a local store. Her Pendleton wardrobe was worthy of a store section. She savored bargains found at a choice second-hand store in Estes Park, especially those sparkling jackets she wore with such grace. When driving from Boulder to join Lynn and Peter at a musical event, I asked how dressy she was going to be. Her answer was "nothing special." I often arrived to find her decked out in a purple or black outfit one could wear to an opera gala in the city. I eventually quit asking. Never did I try to match her lovely outfits and certainly not her grace or carriage, though I, too, modeled years ago.

I returned with two items I saw Lynn wear more than once--a hand-made vest, yes with a few sparkles, and a long red paisley skirt that I won't try to wear with her grace. I wore the vest to dinner with friends in Boulder and felt as if I was wrapped in Lynn's warmth. 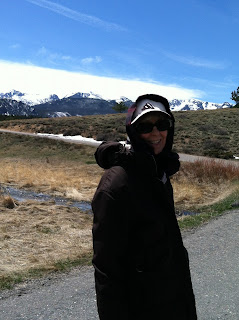 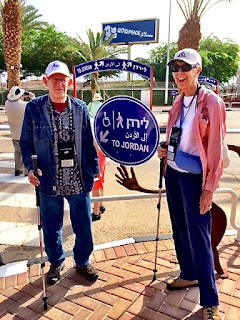 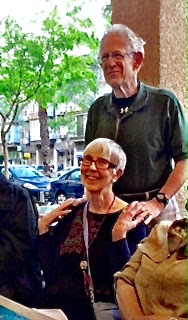 As I look for photos, Peter is in more of them, perhaps because he hiked with me. I enhanced the one above. However, the one I pulled up was the original. Maybe I can fix it later!

I love that my compassionate therapist friend, one who could go to the darkest places with me, also loved sparkle and modeling. She said the Lynn who modeled and invited folks into the store was a different personality than her usual reserved self. I was privileged to count her as a friend.

PS:  The two photos of Lynn and Peter were taken on our wonderful trip to Israel last April, one as we were about to cross into Jordan to see the Petra ruins, the other at Peter's birthday dinner in Tel Aviv--joyous times!

Posted by Maggie at 8:23 AM No comments: