A Bit About the Experience and the People

The subway entrance below is the one nearest my friends' home and we went there more than once many days. They don't have a car so grocery shopping is one or two subway stops away where there are large malls. Nagoya isn't a city that many Americans are familiar with but it is Japan's third most populous urban area with a population of over two million people. My friends live in Nagoya's suburbs. When I headed out to explore other areas I caught the subway one stop to transfer to the red line and many stops to the Nagoya Train and subway station, about thirty-five minutes, to catch trains to Kyoto, Osaka, Tokyo, Hiroshima, and Takayama in the mountains where the three of us went together. I took the JR since that was my rail pass but other trains rolls through as well.

Cultural practices were on display in several ways. Men have the priority on seating when the train is crowded--often. Younger women didn't look for a seat in front of a man. One man immediately got up to give me his seat and another offered but I was only riding one stop and we were halfway there. Many times I stood while young men were seated near me. The benefit was that when I got home my balance had improved! 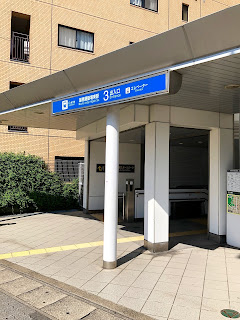 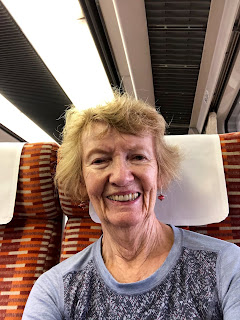 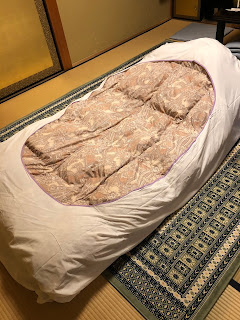 Japanese style inns--ryokans advertise the experience of sleeping on a mat on a tatami floor mat. We did that at my friend's home--very thin mats. The two places I stayed where we had them the bedding was similar. The photograph you may recognize is at the monastery. The bedding on our Japanese-style beds at our ryokan in Takayama in the mountains was similar. However, those beds were on low box springs making them very comfortable and easier to get in and out of. I was glad I chose a bunk bed in a guest house rather than a mat on a tatami floor in a Japanese-style hostel. Those were usually more expensive too. 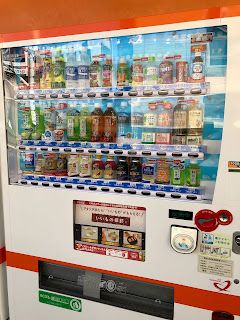 The picture of me above is in a Hikari JR train, the type fast train that I took from Nagoya to other parts of Japan. While Japanese do not eat in public, unless you consider groups of young people in the covered shops or in the youth area in Tokyo, food on the trains is an exception. I exist on energy bars and my friend used her Google translate app to learn which Japanese brands might be gluten free. She found two, one I liked better than another, and I guessed on a couple of others--correctly on one, not so on the other. She warned me that eating a bar as I walked to the subway or on the subway or any other public space where others were was not polite. The drink vending machines like the one you see above are everywhere. They are prevalent on the train waiting areas and several times I purchased a cold latte from a machine--320 yen. I usually had my water bottle filled but occasionally needed to replenish it with a bottle from a machine.

Some of the various snack shops on the train line waiting areas stock bento boxes--cold dinners of Japanese food. I saw business men in the train eating prepared dinners but didn't realize how easy they were to obtain at first. Larger shops in the big train stations--Nagoya, Kyoto, and bigger ones in Tokyo have them too, but they are easy to purchase just prior to boarding the train. Sometimes the train's drink and snack trolley got to my car in time to purchase something, but they didn't carry the box meals. In the photo below you can see the drink machine in the background and the snack shop is right there. 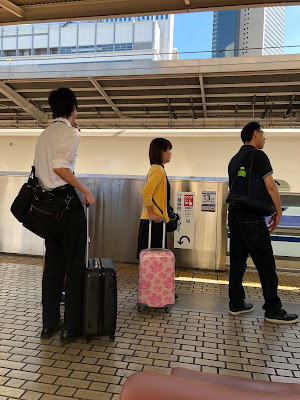 Most bento box meals featured rice. Usually there was raw fish--some recognizable, some not. The rest of what was in the box wasn't recognizable unless there was tofu. Lots of gelatin squares were in desserts and once I had what seemed to be raspberry gelatin squares that must have been meant to be dessert. My friend always had brown rice (much preferably to the globs of white), roasted veggies and other leftovers in the refrigerator but I often hadn't stopped mid-day to eat so eating on the train was my late lunch. 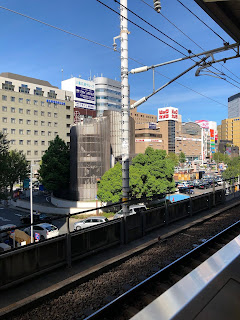 I found the Japanese to either ignore me or on a few occasions to be almost overly helpful. One such occasion was when I reached the train platform number where my train would arrive and a train had just pulled up. I was trying to be sure it was my Hikari before trying to reach the unreserved cars before it left. A middle-aged Japanese businessman, the only time this happened, asked what I needed. I'd determined it was my train but was standing in front of car 13. Cars 1 - 5 were those for people without reservations and many trains don't stop longer than for those getting off and those ready to get on. I said I was wondering whether I had time to reach the unreserved car. He motioned for me to follow him and led me down the platform to car five and watched me get in just before the train pulled away. While I could have done that without him and was uncomfortable that he took time to do this, he allowed me to get through various groups of people more quickly because they moved aside for him or he pushed on through. They wouldn't have moved aside for me so I likely caught that train with his help. In a couple of other              similar situations, I walked through reserved cars to an unreserved one, once arriving at my car with the train beginning to move. I could always have a reserved seat but the time it took to find and stand in line in the JR ticket office wasn't always worth it. I'll end this for now and talk about clothing in another post. 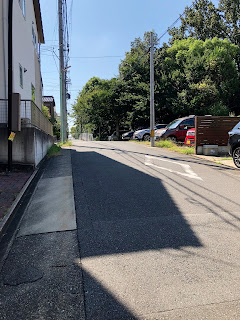 Above, Nagoya from the train platform and to the left part of the daily walk to the subway station pictured at the beginning of this post.
Posted by Maggie at 2:49 PM