Hiroshima and the island beyond -- Miyajima 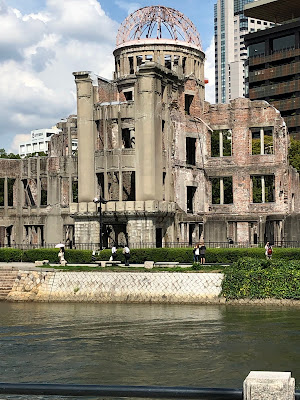 Yes, for those of you who saw my Facebook post on Hiroshima, this is the same building--called the Atomic Dome, one of the few buildings to "survive" the atomic blast. The bomb detonated 160 meters southwest of what was then the Hiroshima Prefectural Commercial Products Exhibition Hall. The interior was gutted and all there died instantly but this exterior survived. It is a chilling reminder.

I hired a free guide for this excursion. That meant that i paid any bus, train or entrance fees for both of us and bought her lunch. My guide was 68-year-old Emiko, a Hiroshima native who had been guiding visitors for ten years. Here she is. While you may not be able to tell in this photo, she came about to my shoulder. She walked quickly but with an almost shuffle on her toes. 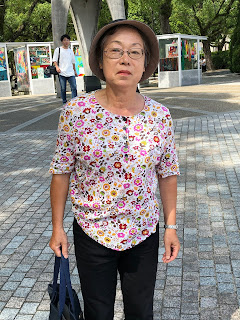 We agreed to meet at the exit of the JR train at the station. From there we were going to my hostel to leave my backpack. I suspect, though Emiko was too polite to say so, that I was her first client to stay in a place like my guesthouse, Mange Tak. She had no idea how to get there and wasn't at all familiar with that area. I would have had better options with my rail pass, but buying her a ticket would have cost more. The Hiroshima Information Desk person quickly made sense of her directions to me but Emiko had to understand in different detail. She was the leader after all. I understood where the guesthouse was when we got off the bus but again she needed to lead--and it was just around a block out of our way. The Mange Tak staff person was very clear about how we could walk to cross the bridge into Peace Park. Emiko used her sweat cloth (a necessary item) to wipe her forehead several times as we walked along the street. Even though the intersections were a bit confusing, she was visibly relieved when we reached the bridge. Soon she could do her job. NOTE: Japanese do not walk against the lights! Never--well almost never. I saw one man walk after the light turned green on a side street in Tokyo.

Once at Peace Park our first stop was the Peace Memorial Museum. The exhibits that showed what happened with old pictures, archived films and models are truly horrific! It is not for the faint of heart. All the exhibit explanations are in clear English as well as Japanese and I didn't need Emiko there. What she provided was the impetus to keep on going through the exhibits no matter my urge to bolt and say that was enough. I eventually did, but only after viewing several family stories of the effects of the bomb over time on their health and financial situations. I didn't spend much time with the development of the bomb--I live in Tennessee and have been to Oak Ridge and heard the bomb development story more than once. I skimmed the pleas for peace too as that's in my DNA, but those exhibits are clear and hopeful. The flame that burns in a memorial in the park will not be quenched until all nuclear weapons are destroyed. 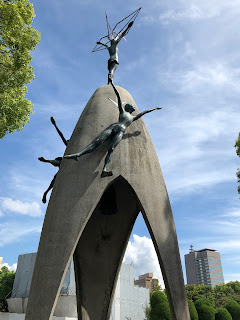 I was, as many are, most touched by the story of the 10-year-old girl, Sadako, who got leukemia as a result of exposure to the lingering radiation. She believed that if she could fold 1,000 paper cranes--a Japanese symbol of good fortune and longevity, she would be cured. She died before finishing the 1,000 and her classmates finished them for her. There are class cases full of brightly colored paper cranes near the memorial above. 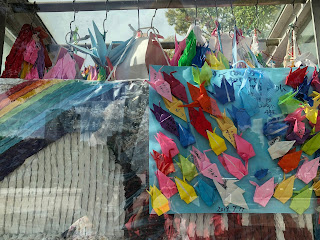 Since Emiko was a Hiroshima native as were her parents, I asked about her family's situation during and after the bombing. Her Mother, living in a suburb with a baby boy, was a nurse called into action to help the survivors. She answered the call with two others from her area but found that there was little she could do. She didn't talk about it very much until near the end of her life. She died of cancer but was in her early nineties. Emiko was born after that with no ill effects but blamed the radiation on the fact that her younger brother had six fingers and had a child who had six fingers. I asked why her Mother stayed in the area. Her father was a soldier stationed in New Guinea so her Mother was alone with a young child and from her point of view, couldn't leave.

There was more, more exhibits, more memorials and as always beautiful trees. I did ring the peace bell, a wonderful resonate sound. After we toured the memorials and were both dripping from the heat, Emiko guided us to her favorite restaurant for lunch. I wasn't willing to chance a nicer lunch and encourage her to do the same for my budget didn't need straining. She was welcomed by name so it was obviously her regular lunch spot. She had a plate of noodles, cabbage and other items I couldn't name. I was very boring and had thin-sliced lamb in a slightly curried sauce with, of course, rice--and three glasses of water. I'd finished my thermos long before lunch.

During lunch I learned that Emiko, who spoke and wrote English such as "we go to gardens now. We meet at train station" had been an English teacher. She laughed and said broken English speaker was English teacher. It wasn't so difficult to understand why most Japanese speak no English! (I also was told that many Japanese children aren't interested in learning English though it's part of the curriculum.) All but one of the more fluent English speakers I met had lived in the States for a year or more.

Her plan had been to take me to the Hiroshima castle but when she realized I'd seen the castle in Nagoya even though we couldn't go in, she asked if I would rather go to the gardens. She didn't think we had time for both. I voted for the gardens but with another place in mind. After a couple of buses which she understood Emiko and I were quickly walking down the sidewalk when I saw it. "There's the art museum," I exclaimed. "Have you been there? There's an especially large Dali on exhibit there," I said. "You want to go?" she asked as I walked toward the entrance. She thought it might be closed since there was no line or people going in or out but it was open. Emiko had some sort of pass that allowed both of us, once I showed my passport, to go in free. The Hiroshima Prefectural Art Museum was mentioned in my Frommers book. The Dream of Venus was the large Dali on exhibit. It was the first piece was saw as we went into the exhibit hall. The other important piece noted in my guide gook was one called the Holocaust at Hiroshima by Ikuo Hirayama, an acclaimed Japanese artist who was in junior high when the bomb was dropped. It too was in the surrealistic style. There might have been a dozen people total in the entire museum and the paintings by newer young Japanese artists were wonderful. They were hung thematically where possible--darkness and those included a wonderful moonlit landscape and shadows in a garden and another of dancers and partiers. I wanted postcards of some of those paintings but alas only "masters" were in the gift shops collections.

I lingered too long I'm certain in that wonderful museum for when we went to the gardens next door Emiko said we only had time to walk through half of the garden. That half was wonderful and I insisted on slowing down--she asked what was wrong--to take it in. 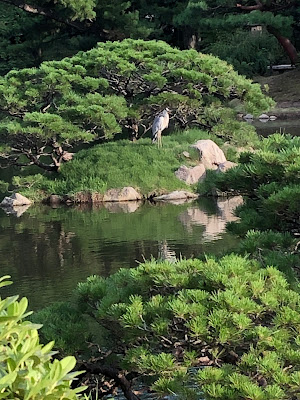 Near the end of the gardens Emiko wanted to buy me a tea from the drink machine and we sat and watched the koi swim nearby. Afterward I insisted that she go with me to a bus stop I would understand so I could get back to the Guesthouse without getting lost. 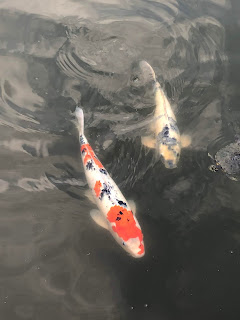 I need to move through more quickly but must say a bit about Guesthouse Mange Tek where I stayed in a reasonably comfortable curtained lower bunk with four young women three of whom were American and amazingly considerate and quiet for $25. The young staff members were absolutely wonderful! The bar tender was Canadian and it was relaxing to have a beer and visit with him. The young woman who greeted me for the evening was clear with what she said but had a limited vocabulary. She recommended that I talk to the woman who came in for the morning shift. She had perfect English and was able to save me enormous time with her directions to the ferry I needed to catch to go to Miyajima Island. I had a route mapped out but could tell that getting back that afternoon to catch the train toward Nagoya and making the Japanese garden stop I planned wouldn't work easily with my plan. Everything at Mange Tek was perfectly clean. Our floor was female only with a code for the door but the men from the floor above used the showers and toilets outside our room. I didn't see or hear a man until I was leaving and a man came in his Japanese robe for a shower and shave.

Miyajima Island is a UNESCO site, but the memorial that makes it famous is wrapped for restoration at this time. I knew that but decided to take the ferry over anyway. It was billed as a charming island. I am jaded I know but the area around the waterfront reminded me of Gatlinburg--nicer than Estes Park perhaps but similar too. I did pay to go into the shrine related to the gates that stand, when the tide is in, in the water, and took photos of the wrapped shrine. My favorite part of that island, and I didn't have enough time to hike all the way up--and perhaps wouldn't have anyway as I stopped when the trail began to get very steep and rocky was the trail that goes to the highest point on the island. My red sandals are good to a point! The young bartender had recommended it and told me where to access it after learning that I love to hike. Once again I was almost alone. Some came to the chair lift but most of them came another route and I saw only two young people after I hiked beyond the chair lift entrance.
On the ferry going toward the island                                   A respite on the trail 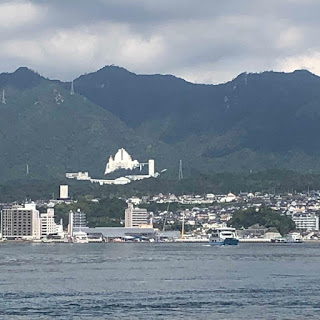 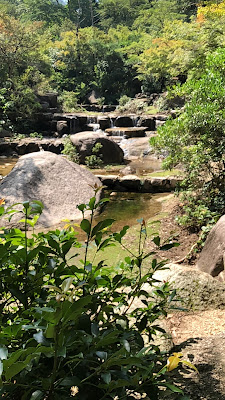 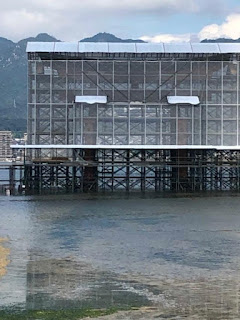 The Miyajima Shrine for Hiroshima and above the gates covered for restorative work. Look carefully and you can see the gates. 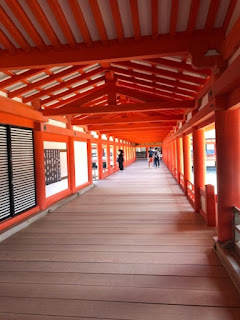