Takayama -- in the mountains with friends 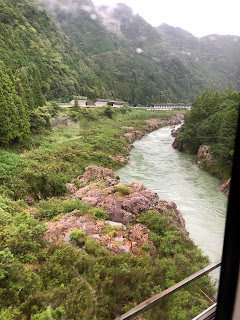 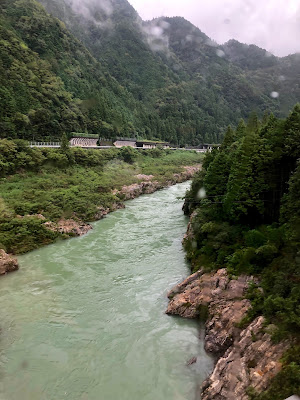 I'd been told by a hiking friend that the train ride to Takayama was beautiful. Clouds hung over the mountains that morning and as we climbed into the mountains, rain came down eventually making it impossible to get good photographs from the train. But for as long as possible I held my i-Phone to the window and pushed the button. 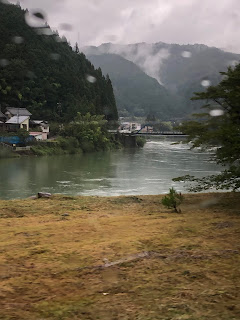 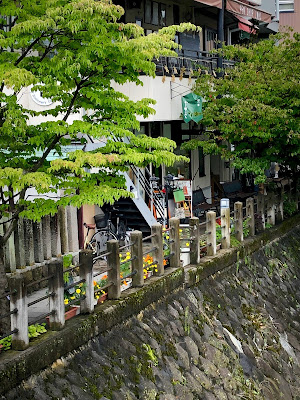 The three of us, my friend whose dogs we took to Nagoya and the friend who accompanied me, went to Takayama in the Japanese mountains for two nights and three days, escaping from the 100 plus heat. 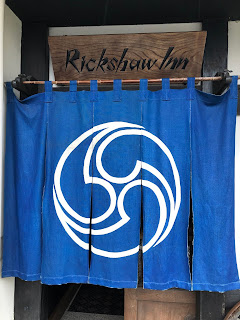 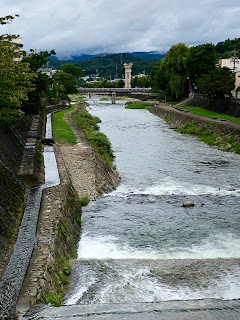 Takayama has a charming and historic old town with homes that have been there since the Edo period. I didn't take photos of the homes as we walked through back streets that were dark and showed walls of the homes. I wish I'd taken a photo or two of the shows and our friend who spent more time in them possibly did. My only photos of Takayama proper are of the water from the bridge that separated old town from the area where our hotel was and looking down on shops from the bridge above. It has a famed fall festival and my friend hopes to take her husband and daughter and visit during that time this fall.

We stayed in a ryokan that I'd found on booking.com. It wasn't fancy and the staff was almost non-existent but the rooms were spacious with a sofa and chair as well as room for two Japanese-style beds on the floor. What made it perfect was the large lounge room with many Japanese coffee table books that our friend who was dealing with a painful foot could enjoy while our friend whose dogs we brought and I headed out to see the Hida Folk Village. We could have found a bus but decided to walk the mile and one-half, the last part up a steep road.

Hida Folk Village is an open air museum exhibiting houses and buildings built during the Edo Period----1603 - 1867. These houses were relocated from their original locations to create the museum in 1971.  I was interested because a hiking friend who was there as part of a tour a year ago recommended it. I was particularly interested in the examples of farmhouses with steep thatched roofs which resemble a pair of hand joined in prayer--"gassho." 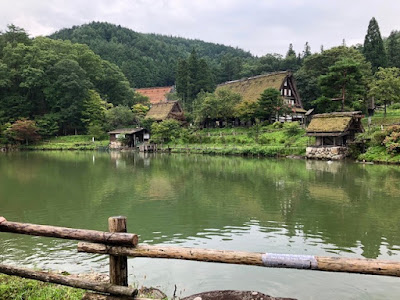 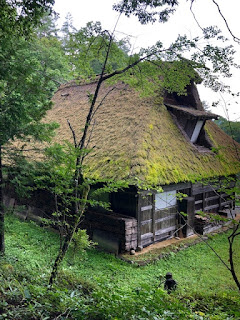 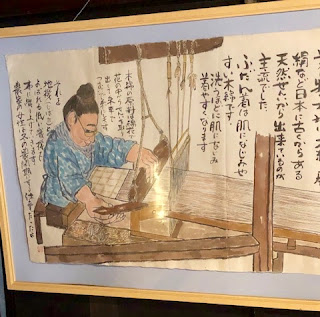 The illustration of the woman weaving took a wall and is an example of other crafts illustrated so beautifully. We saw a man sitting on the floor weaving straw baskets in silence in a building where neighbors would have gathered. One craft house was home to a master wood carver and had I planned to spend a significant amount of money, one of his owls would have been my choice. He was happy to have us view him as he worked. We walked up a steep hill to see a home with both privacy and a view of the area and down steep stairs as large rain dropped plopped on the steps ahead of us. The rain didn't last long and we stopped at a tourist gift shop down the hill. 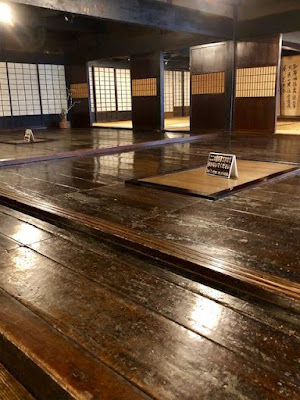 The old wood's luster shines even in my I-Phone photo. I don't remember if this was one of the public buildings or the home of the Shogun. Both were very large. There was an extensive exhibit of how weddings were done from the engagement with both sets of parents present to the food preparation for an extensive celebration. The kimono before was in this exhibit as the bridge's wedding dress. 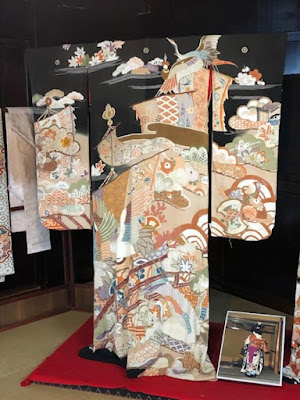 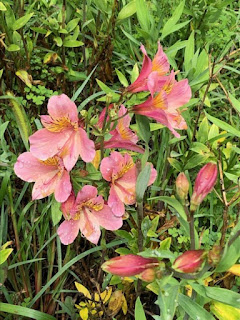 I couldn't resist taking a photograph of the alstroemeria growing wild as they often grace my living room (from Trader Joe's). I'm aware that they are considered a Peruvian lily but they were growing wild at the Hida Folk Village. 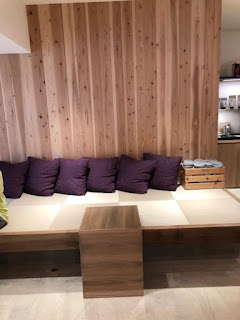 That evening we'd planned for what was my most expensive dinner of the entire trip. A sushi bar restaurant--that's how it seemed to us--was a couple of doors down from our hotel. We'd looked in the first night and saw that the seats along the bar were filled with Asian men enjoyed beautiful food and planned to get there at 5:30 so we'd be first to get those seats the next night. The meal was a fixed price including either a beer or sake and we watched as our beautiful sushi was prepared. From the soup to the dessert that I don't remember, it was perfectly done but came in a rush--definitely not my style and I was eating after the others finished. What I began to notice as we sat there were the Japanese couples who came in, nodded to those preparing our food and headed to what was obviously a larger room in the back. One couple had their children with them. Our sushi bar meal was set up to attract tourists. The locals likely ate from a simpler menu in the back room. The food was excellent and the preparation      fun--more if I hadn't been so busy eating to be ready for the next course! My friends still think of that meal as simply wonderful and it was good, but perhaps not $35 good.

The next morning Jenni and I headed out early to find coffee. I'd tolerated the unusual instant one could make in the lounge room the day before but she hadn't been willing to try it. There were coffee shops everywhere but as I would see over and over, they didn't open until 9 am or maybe even 10. We ended up at a hotel coffee shop and I absolutely enjoyed scrambled eggs with my coffee. Jenni enjoyed the croissant that went with my breakfast and our coffee was excellent.

A coffee shop that we accidentally found across from the train station was special and so enjoyable that we stopped there before boarding the train home. 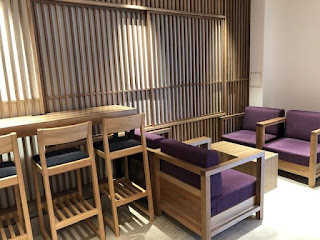 The decor was part of the attraction but the soft ice cream with intense warm coffee syrup over it that dissolved into more of a drink was special too.

It rained most of our last morning but that didn't stop the two of us from walking part of the path at the end of the old town, one that skirts a cemetery and winds through temples and shrines with a steep path up to ruins of Takayama's former castle. We'd planned to make the 3.5 kilometer walk but with the rain stopped short of going up to the castle ruins high above us. The first photo was taken when we first arrived and walked the length of the old town to find this shrine at the end. The red head in the foreground is our companion who didn't walk back with us in the rain. 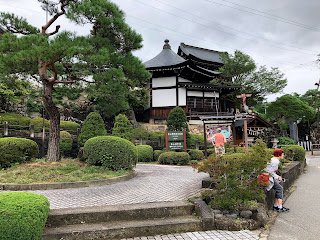 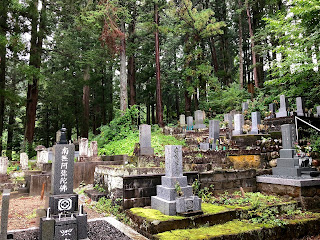 This was my first experience of falling in love with a cemetery set in tall woods. The rain baskets below were so appropriate as we stood under a protruding roof and watched. 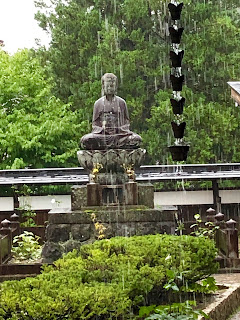 It was a good trip, and although we missed our train in this small station thinking we'd be called from our seats or see movement out friend expected that we missed and rode in an unreserved car that was closer to fall, we left having enjoyed our time in the Takayama area very much.
Posted by Maggie at 8:02 AM